Following the closure of the London Boat Show, the Düsseldorf exhibition is expected to welcome more British visitors

After a run of 63 years, the January London Boat Show is no more. IBI speaks to four companies which traditionally would have been displaying their products this week at an event which at one time drew over 325,000 visitors.

The specialist London National Boat Show was launched in 1955 at the Olympia exhibition centre before moving to its spiritual home at Earls Court where it opened for a 10-day run on the 30th December 1959. This iconic exhibition hall – with its Olympic-sized pool – provided a great setting for the show managed by Alan Jones and subsequently David Hough during the boom years of boating in the UK, but also attracted large numbers of international buyers who enjoyed its proximity to the West End of London and the January sales. 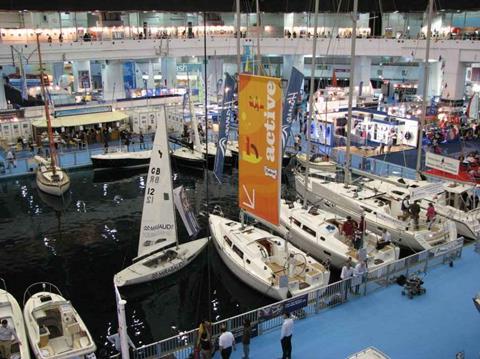 Initially funded and then sponsored by the Daily Express newspaper and organised by the Ship and Boat Builders National Federation, a forerunner of today’s British Marine, it was a must-see event for vast numbers of enthusiasts. However, with attendances sliding in the 1990s and talk of redevelopment of the site, the show directors evaluated a number of alternatives including the National Exhibition Centre in Birmingham, before deciding to move in 2004 to the new Excel centre in East London – with high hopes for a revival. 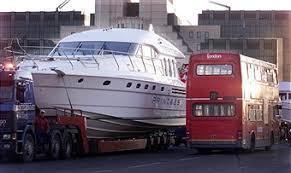 Manoeuvering yachts through London streets on their way to Earls Court was a news event in itself.

The first 10-day edition in the new venue was considered a success with the show filling most of the North and South Halls and a credible uptick in visitor numbers at around the 200,000 mark, but subsequent shows saw both floor space bookings and visitor numbers falling regularly until eventually in 2018, the then five-day show was confined to the South Hall only and attracted less than 60,000 visitors. Having lost money for a number of years, its fate was sealed.*

Nonetheless, some of the UK’s best-known names in the industry achieved excellent sales at the show right up to the end. IBI talked to four such businesses to see how they were compensating for the loss of an exhibition at which they would normally have expected to enjoy a high volume of orders.

Chris Head of Sunseeker London commented,“The decision to close the London exhibition, while understandable from the organiser’s point of view, was a great disappointment for us as we always did a substantial amount of business at the show. In its place we will do more in-house events with the shipyard and are also encouraging our British clients to visit us at this month’s Düsseldorf show, which has so much to offer.”

Robert Mitchell of Marine Superstore voiced similar sentiments. “We were sad to see the end of the London Boat Show, where we did good business in the past. However, I don’t blame the organisers as they did their best. Consumer preferences are changing and once it became a five-day event and the overall number of boats on display diminished, the show’s appeal also declined. As a marine equipment retailer, we are looking to pick up the lost business through increased on-line sales and will continue with a big participation at the Southampton Boat Show.”

David de Vere of Bates Wharf reflected, “Like many companies, London was an important show for us, as it always produced a good level of sales. However, when it was reduced to five days it really didn’t give our clients long enough to make a buying decision and the overall costs from an exhibitor’s point of view weren’t much less than the traditional 10-day show. To try to offset the effect of its closure, we are inviting our prospective clients – at least those interested in the larger boats – to visit us in Düsseldorf and we are offering them incentives to do so. As far as the smaller boats are concerned, we are organising together with four or five other dealers a special Thames dealer show to take place on the river in March or April. We will also be taking space at the new in-water London Yacht Show in May.”

Will Green of Princess Yacht commented, “I feel a sadness at the loss of the good sales opportunity which London always represented, including last year, and have mixed emotions about not being in London this week, but I understand why some segments of the industry could no longer support it. We have been encouraging our customers to come to see us in Düsseldorf where we will have the biggest stand at the show and will also redouble our efforts elsewhere.”

The manager of Boot Düsseldorf Petros Michelidakis, while regretting the loss of the London show for the industry in general and as a catalyst for getting new people into boating, has readily accepted the challenge of making as much space as possible available to British companies this year but with the promise of substantially more once a new hall comes on stream next year.

*In November the Informa group, the largest exhibition organisers in the world, announced it had purchased the summer in-water London Yacht Show which was created by Peter Bryant in 2014. The industry association British Marine has now become a partner in the event which is due to be held in St Katharine Docks near Tower Bridge from May 8-12. In time the show could act as a replacement for the traditional London indoor winter exhibition, but berthing space is limited and it will need the commitment of some key UK-based companies for it to succeed. Informa already owns the Monaco Yacht Show, the Fort Lauderdale Boat Show, The Miami Yacht Show, the Palm Beach International Boat Show, the St Petersburg Power and Sailboat Show, the Suncoast Boat Show in Sarasota and are also co-owners of the Shanghai Boat Show with Sino Expo.