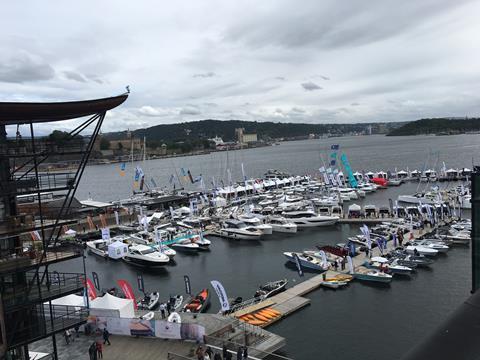 This year’s Oslo Floating Boat Show (Båter i Sjøen), which closed on Sunday, was a fully booked exhibition with good results. Some 11,056 people visited the show and over 300 boats were on display, making it Scandinavia’s largest on-water show.

According to event organiser Norboat, sales were positive. “This tells us that boats and boating is a big and very important leisure activity in Norway, and that the Oslo show – Båter i Sjøen – is an important meeting point. We are very proud of that,” says Norboat CEO Leif Bergaas.

Already from the first day boats were sold. Day cruisers and robust motorboats normally sell well, but Norboat says consumers increasingly want bigger engines and more equipment on their boats. Another new sign is that sales of bigger boats are picking up again in Norway. Several European brands were at the Oslo show, including Sunseeker, Princess and Beneteau.

Local exhibitor Aaby Marine reported strong interest for Windy and Nimbus boats. “We saw bigger sales at the show this year,” says Aaby’s Jørgen Haga, adding that exact numbers are not yet official.

“Ibiza Boats had good sales with almost 20 contracts for new boats,” said Evy Minde, head of Ibiza Boats. ”The trend is that people want bigger engine alternatives and a lot of extra equipment.”

Thomas Aalrud at Marex Boats said: “Our team is very satisfied with this year’s show, where we sold two boats. We can see that interest in boats is very stable,” he adds.

“Team Viknes is very pleased with this year’s show,” says Kristian Sivertsen at Viknes Båt og Service. ”We have sold several boats, even to a customer from Bodø in the very north.”