Genoa International Boat Show to touch down in New York

The Genoa International Boat Show show will visit New York from October 12-14, to celebrate Columbus Day and to Launch its 60th edition that will run from September 17-22, 2020.

UCINA, Italy’s Marine Industry Association, has accepted the Columbus Citizens Foundation’s invitation to the celebrations for this year’s 75th Columbus Day in New York City and will take part with a delegation including its president, Saverio Cecchi, and vice president, Andrea Razeto, alongside Ilaria Cavo, Liguria’s Regional Assessor for Communication, Education and Cultural Policy, and Laura Gaggero, Genoa’s Municipal Assessor for the Development of the Economy, Tourism and Local Marketing, both there to represent the Region’s local institutions. 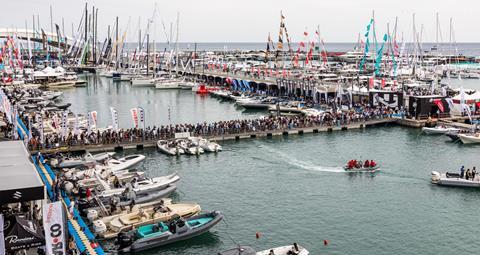 The 60th edition of the Genoa International Boat Show is set to take place from September 17-22, 2020

The Big Apple will also be the stage for launching the 60th edition of the Genoa International Boat Show, set to take place from September 17-22, 2020. UCINA says it has already started making plans to put together a global event to celebrate its 60th edition.

During the New York visit, the delegation will meet with representatives from local institutions, take part in the Columbus Day Gala on Saturday 12th October and finish with a second Gala at the Italian General Consulate, on Monday 14th October.

The representatives from Genoa will also be present for the traditional Columbus Day Parade, on Monday 14th October, a celebration of Italian-American culture, which will begin in Midtown in the morning and continue through Fifth Avenue.

Viewers will be able to watch the parade live on ABC in the US and digital channels worldwide. ABC will also be covering the red carpet for this year’s event, located between 67th and 69th streets, while also frequently broadcasting a video created to display the value of what Genoa, Liguria and the International Boat Show can offer the world, with internationally renowned architect Renzo Piano, the Mayor of Genoa, Marco Bucci, the President of the Liguria Region, Giovanni Toti, General Director of UCINA, Marina Stella, and Commercial Director of the Genoa International Boat Show, Alessandro Campagna, all inviting viewers to visit the city and region.

Saverio Cecchi, president of UCINA: “We are truly honoured to be in New York for such a historical event, to have the chance to use this global stage to promote the 60th edition of the Genoa International Boat Show. Genoa’s is a Boat Show that has seen double-digit growth every year for four years running. Genoa is Christopher Columbus’ birth place and the Capital of Yachting, a city that showcases the very best of a healthy and growing industry in Italy and across the globe. We invite everyone to come and join us at the Genoa International Boat Show from 17th to 22nd September 2020, for an industry-leading event that will celebrate once again the booming success of the Made in Italy brand around the world”.

“For the first time ever, the Liguria Region will be taking part in the Columbus celebrations in New York alongside UCINA. This is because of a very special occasion: the 75th edition of this event is a perfect opportunity to launch a special edition of the Genoa International Boat Show, which next year will celebrate its 60th anniversary. It will also be an important year for the city itself: Genoa’s new bridge will open in 2020 along with a commitment to promote the excellence of such a wonderful city and region. Launching next year’s International Boat Show is therefore a chance to also shine the spotlight on the Liguria region and the uniqueness of what it has to offer: unmatched sailing expertise and the universal symbol of Columbus – stated Regional Assessor for Culture Ilaria Cavo – After meeting with local institutions, the delegation will also take part in the traditional parade on 14th October during which, for the first time on ABC, marketing videos for Liguria will be broadcast on live TV, in which world-renowned architect Renzo Piano, designer of Genoa’s new bridge, alongside the city’s Mayor, Marco Bucci, and President of the Liguria Region, Giovanni Toti, will invite viewers to visit Genoa. Throughout the same dates, a documentary will be filmed to promote the region and its products, funded by a FESR tender for audio-visual productions: the film will be produced partly during the Columbus Day festivities and later broadcast on Italian channels. Our presence in New York will also be aimed at establishing and developing relationships with the Ligurian associations across the Atlantic and showcasing the very best of the Ligurian territory”.