Attendance was up by 7% at this year’s event 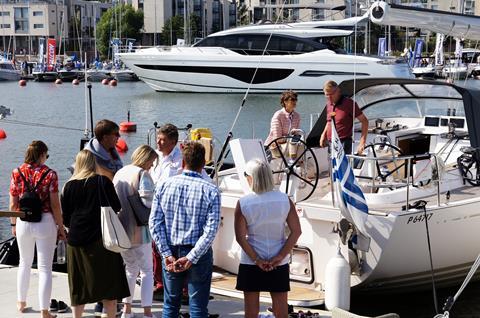 Sailboats are an important part of the Helsinki show

The 2019 Helsinki Boat-Afloat Show closed on Sunday with attendance up 7% compared to the previous year. New boat registrations in Finland are said to be on an upward trend, and the number of exhibitors at the event also reflected this: there were more than 155 exhibitors present with over 280 boats on display.

“We are truly happy with the event,” says Jarkko Pajusalo, managing director of Finnish marine industries federation Finnboat, the organising body. “Almost 14,000 people attended it, representing a strong growth of 7% from one year ago. We have received a lot of positive feedback from visitors and exhibitors alike, and it is great to see how people come to the event not just to see the boats and buy themselves one but also to have a good time.”

The Helsinki Boat-Afloat Show provides a unique setting for exhibiting sailboats, as the boats can be displayed in their own element, ready for sailing with the masts, sails and lines in place. This explains why companies selling sailboats consider it the most important boat show in Finland, Finnboat claims.

”We exhibited two Beneteau sailboats, and at times people had to wait in line to board them,” says Antti Saarisalo of Ajola Yachts. ”We made a lot of offers and believe to seal some deals yet as well. We reckon that especially the new Beneteau 30.1 is a very suitable boat for the Finnish market and that it is competitively priced even against second-hand boats.”

D Marin Oy, an authorised Swan sailboat repair shop, was a first-time exhibitor, displaying a Swan 38 they had repaired over the previous winter. “Lots of interested visitors came by, and many of them requested an offer. Among them were Swan sailboat owners requiring assistance for repairs as well as prospective buyers looking for expert help,” says Jan Sjösten of D Marin.

Seven boats and a jet ski were available for test runs at this year’s show, resulting in almost 500 test runs in all. The motorboat piers were likewise busy with activity. It was the first time that these boats were available for test runs, and the opportunity attracted plenty of interest among visitors. According to Finnboat, the number of new boat registrations in Finland is on the increase this year, and the level of interest shown by the visitors only underlined this trend.

“Visitors felt positive about this year’s summer and showed eagerness to purchase a new boat or trade their current model for a newer or bigger one,” said Christoffer Wallgren, export manager for Oy Brandt Ab. The company markets Silver, Faster and Terhi boats, among others. “Things got busy at the Honda pier, and we were able to close deals right then and there. This was the first time that the exhibited boats were available for test runs, and the opportunity brought us a lot of new customers as well.”

Mikael Winqvist, managing director of AMT Boats, said the company made more offers to prospective customers at this year’s event. “Particularly our new models, the AMT 210 DC and the BR, attracted interest,” he says. “Another clearly popular category is the 5.5m-long boat with either aluminium or GRP hull. The boats tallied more test runs than in years past, thanks to the new opportunity for visitors to test run the exhibition boats.”

The boating industry is a significant employer in Finland: companies in the field directly employ 3,500 people, while the total employment effect lies between 4,000 and 6,000 people. Boat manufacturing is going strong in Finland, unlike in the other Nordic countries, Finnboat claims. In the previous year, as much as 73% of Finnish production was exported from the country.

The next major event in the boating industry in Finland will be the Helsinki International Boat Show at Messukeskus, Helsinki’s expo and convention centre, from February 7-16, 2010.