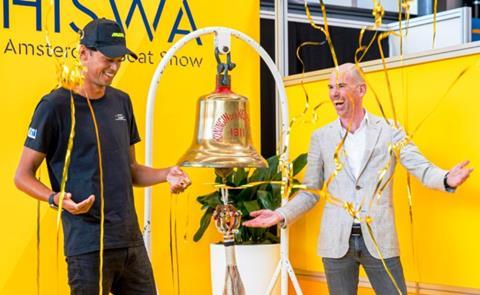 The 65th annual HISWA Amsterdam Boat Show opened March 11, as scheduled, bucking a worldwide trend of cancellations and rescheduling of all sorts of events in the face of a coronavirus outbreak going global.

The 65th annual HISWA Amsterdam Boat Show opened March 11, as scheduled, seemingly bucking a worldwide trend of cancellations and rescheduling of all sorts of events in the face of the coronavirus outbreak going global.

But just two days into the show, organisers were forced to pull the plug following guidance from the Dutch government.

During the opening ceremony, two award winners were announced: Technautics’s Cortex V1 Mariphone AIS transponder was named Product of the Year. And the Gadget of the Year award was for swimwear with a waterproof pocket from The Rake, the online men’s clothing publisher.

The Amsterdam show saw the launch of a new sailboat class, the Class Mini 5.80. It targets sailors, young and old, who dream of sailing the oceans in handy, affordable and self-built ocean-worthy yachts.

Electric boating takes pride of place at Amsterdam, especially for tenders and weekenders that draw a massive audience in a country of canal-laced cities, lakes and creeks and 500,000 recreational boats.

Official figures show that in the Netherlands, 1,200 boats are sold annually: 600 tenders, 100 sailboats and 500 motoryachts.

Also in Amsterdam was Rik Breur, who won a European Inventor Award for his Finsulate antifouling fibre wrap that prevents the growth of algae, barnacles and mussels on boat hulls. The European Patent Office issued Breur its marine technology award.

Finsulate is a fibre coating that mimics the sea urchin. The thin, carpet-like material sits on an adhesive substrate that easily attaches to hullsa. It is covered by tiny nylon spines that act as a natural repellent. Using ‘electrostatic flocking,’ Breur made the fibre spines stand on end to prevent hull fouling.