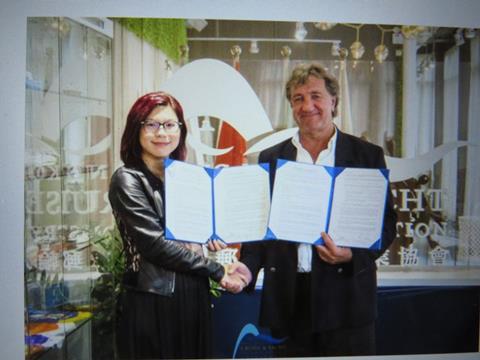 Kara Yeung and Andy Treadwell with the MOU document

Hong Kong is set to have a new yacht show timed for November 19-22, 2020. The initiative follows the signing of an MOU (Memorandum of Understanding) between the Hong Kong Cruise & Yacht Industry Association (HKCYIA) and Verventia, organiser of the Singapore and Thailand yacht shows.

The new event will be associated with the International Cruise and Yachting Festival (Hong Kong) 2020 and seemingly branded as the Hong Kong Yacht Show. It is not known at this stage whether this will solely be a yacht show or will also include commercial cruise ship exhibitors.

Either way, this new HKCYIA-Verventia collaboration suggests that: “The launch of the Hong Kong Yacht Show will bring a new international showcase to Asia’s most mature yachting market.”

The new event will be jointly organised between the two partners.

The MOU committing to the partnership was signed at a press conference held during the 2019 Singapore Yacht Show (SYS) last April, when Kara Yeung, chief executive of HKCYIA, and Andy Treadwell, Verventia’s CEO, outlined the rationale behind the launch of the show in 2020. The organisers’ objective is to promote and develop the yachting industry in Hong Kong and the Guangdong-Hong Kong-Macao Greater Bay Area.

In their HKYS statement, the organisers say: “By common consent, this will bring prosperity and positive economic impact to local businesses and the supply chain throughout the China market, as well as positive international PR, inward investment, maritime education and protection of the oceans to support the Hong Kong yacht industry, together with the creation of employment.”

Yeung said today: “Hong Kong has by far one of the biggest potential markets in Asia. We are delighted to bring the Verventia organising team into this joint venture, as planned last year, because they are experienced yacht show organisers who have made a remarkable success of the Singapore show over the last seven years.

“We look forward to a long and fruitful collaboration which will boost the local and global yachting industries, as well as bringing new business, jobs and prosperity to local service, supply and hospitality industries.”

Following the signing of the MOU, there has been no comment made about how long any subsequent arrangement between the HKCYIA and Verventia might extend for.

“What Kara has achieved in the last couple of years to get this project off the ground is fantastic,” says Treadwell. “Neither we, nor our fellow industry practitioners, could have done this without the HKCYIA. We can, however, bring in international players, and we know how to promote the show to potential buyers, so in that sense it’s a perfect partnership that we hope to develop steadily over the next few years.”

The new yacht show and the festival will officially be launched at a special event for the Hong Kong yacht industry at the Hong Kong Convention and Exhibition Centre, provisionally to be held on April 23. Details will be announced shortly. Enquiries about participating in the HKYS should be addressed to sales@verventia.com.

Ewa Stachurska, group marketing manager for Simpson Marine, the Hong Kong-headquartered yacht services business which is among the largest yacht brokerage and dealer firms in Asia, told IBI: “We have received the HK Yacht Show announcement PR and will be meeting Kara next week for lunch. As of now, we will certainly support the show with a fleet that represents our brands.”

In terms of Hong Kong marine leisure events, this new show is due to be held just two weeks before the Hong Kong International Boat Show (HKIBS), a regular event that is set to be held possibly from December 3-6, 2020 at Club Marina Cove. A spokeswoman for the show told IBI: “We launched the two possible dates for April and December earlier this year. We have cancelled the April dates because of the coronavirus but we still have to decide about December.”

The HKIBS was cancelled from December last year because of the protests that were being held.