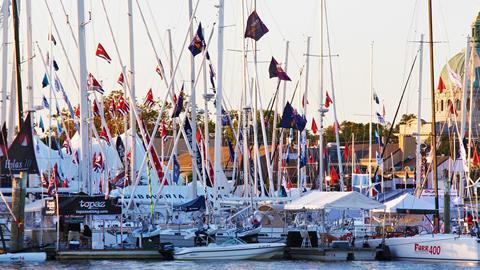 The Annapolis Sailboat Show celebrates 50 year’s as the industry’s premiere in-water event; nominees for Cruising World’s Boat of the Year Award are among dozens of new boats making their debut at the show

The Annapolis show also serves as an industry focal point for the premiere of dozens of new sailboat models from boatbuilders around the world, many of which are among Cruising World magazine’s nominees for the 2020 Boat of the Year awards.

The annual awards, selected by an independent team of judges, recognize the ‘best new production cruising boats and multihulls laid out and equipped for coastal and offshore sailing and voyaging,’ and will be announced in the January issue of Cruising World magazine.

Twenty-four boats – 17 monohulls, 6 catamarans and a trimaran – from a wide range of international builders have been nominated for the 2020 awards.

“This is a deep and highly diverse fleet, ranging in size from the compact Beneteau Oceanis 30.1 to the full-sized Hanse 675 to the Eagle Class 53 catamaran, a radical foiling cat with a rotating wing mast,” said Herb McCormick, Cruising World Boat of the Year director. “It promises to be a very competitive contest, and our judges will certainly have their work cut out to determine the winning entries.”