2020 will be a busy boat show year again for the New Zealand marine industry. New Zealand’s two leading shows are both based in Auckland and split by four months. The Hutchwilco New Zealand Boat Show (14-17 May) is followed by the Auckland On Water Boat Show (17-20). 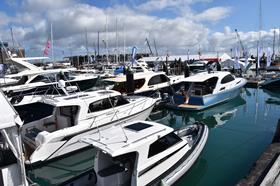 The Hutchwilco NZ Boat Show is predominantly trailer boats, the electronics, outboards and especially the fishing equipment sectors of the marine industry treat this as their premium show of the year.

Both shows recorded amongst their highest ever attendance figures in 2019 and 2020 is already shaping up to be just as big. Organisers of both shows indicate a strong pre-show interest from exhibitors, both locally and overseas.

While the NZ Boat Show is predominantly trailer boats, the electronics, outboards and especially the fishing equipment sectors of the marine industry treat this as their premium show of the year.

Organiser Dave Gibbs, says, “The show is more popular with the industry than ever, with just a hand-full of small stands still available (a week before Xmas!)”.

He added that the 2020 show also looks like again being extremely popular with the public with pre-Xmas sales of E-Tickets at an all-time high.

“One of the key drawcards for the 2020 show will again be the stunning Surtees/Yamaha Grand Prize, a must-be-won prize package with a retail value of over $230,000! There will also be a number of other great prices on offer too”, says Gibbs. 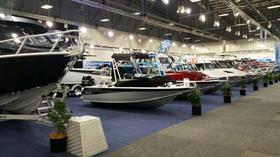 The NZ Marine run AOWBS will be in its second year at the new Viaduct Auckland venue, which was forced on the organisers in 2019 by Auckland City Council, after Emirates Team New Zealand were given the Viaduct Events Centre (previous centre for the show) as their base for the forthcoming 36th Americas Cup series.

The 2019 show proved a big success, with 55 marina exhibitors and over 100 exhibitors on land in and around marquees. The 2019 show attracted 14454 patrons, which while down on previous years, was according to exhibitors a very positive show with good sales made.

Events Manager Stacey Cook says that even before the 2020 prospectus has been sent out, they were fielding a lot of enquiries from new and current exhibitors.

“2020 will see another full show and as we are right on the edge of the America’s Cup bases the activity surrounding the show should be intense and add a lot to the vibrance of the show” says events manager Stacey Cook.