This year’s event will have 12,000sq m of exhibitor space 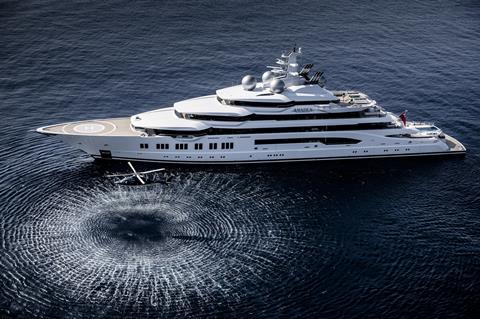 At 106m (348ft), the Lurssen-built Amadea will be the largest yacht at the show

The 7th Qatar International Boat Show (QIBS) is set to expand significantly this year, according to the show’s organisers, with a doubling of the exhibition area from 6,000sq m to 12,000sq m. QIBS 2020 is scheduled to be held at The Pearl-Qatar in Doha from March 18-21, 2020.

The information was provided at a recent pre-event press conference organised by Al Mannai Plus Events with the media being addressed by Khaled Essa Al Manni, chairman of the organisers. He said: “The Qatar International Boat Show is one of the premiere luxury events in Qatar where marine enthusiasts and industrialists can discover the greatest aspects of its products and services.

“The show has been organised since 2013, despite the challenges faced after the unjustified blockade on Qatar by some of the neighbouring states in June 2017. There was a 58% increase recorded in the participating companies in 2019 compared to 2017.”

Al Mannai pointed to QIBS as meeting two main objectives. “One,” he explained, “is an effort to preserve a centuries-old relationship of the natives with the sea, as the sea reserves were the main source of providing the lifeline, and secondly, to make Qatar a hub in the region for luxury, highly-skilled craftsmanship and the most modern boats and marine-related accessories.

”We want to provide a single shopping window to the luxury lifestyle enthusiasts of the region.”

Loay Dalis, executive consultant Al Mannai Plus Events, remarked that the exhibition area in 2019 was 6,000sq m. “Because of the large number of queries and expected increase in participating exhibitors from the high-end lifestyle products sector,” he commented, “the exhibition area in 2020 for the seventh Qatar International Boats Show will be 12,000sq m, a 100% increase compared to 2019.”

In 2017 there were 35 exhibitors, Dalis reported, rising to 55 in 2019. The QIBS website suggests there were 39 exhibitors from 13 countries presenting 120 brands. The number of visitors was said to number 9,800 last year. He pointed out: “There will be some featured events on the opening day and a Gala Dinner night on March 19, 2020. In addition, there are several entertainment attractions in the pipeline.”

According to the show website, where no list of exhibitors is available, the main sponsors for QIBS 2020 are Vodafone; Sotheby’s International Reality, Milaha (a local logistics provider), and the Gulf Times.

One large superyacht that is said to be attending QIBS and also the Dubai International Boat Show held from March 10-14, 2020 at Dubai Harbour, is the 106m (348ft) Amadea, which, according to the broker Imperial Yachts, is starting her Middle East tour shortly. The Lürssen-built superyacht will be the largest vessel to be exhibited at both shows.

Renowned designers Espen Øino and Francois Zuretti partnered with Lürssen on the yacht. Imperial acted as the owner’s representative and build supervisor during the construction period, and now represents Amadea as central agency for sale. Amadea will be available for private viewings around the Middle East, exclusively with Imperial.