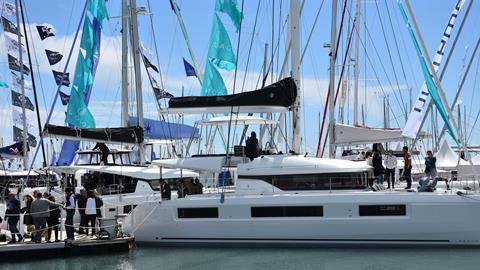 The 10th Multihull International Boatshow was held from April 24-28 at the Grande Motte, on south east mediteranean coast of France, near Montepellier. Founded in 2010 by M2Organisation, the salon took advantage of the windy weather to celebrate its 10th anniversary, with a record number of 60 multihulls presented, including 50 world premieres. The show claims to represent 95% of the world multihull sector.

“This new edition has once again been successful. The shipyards have largely expressed their satisfaction, through full order books”, the organizers claimed in a statement. “It was necessary to retain this year the strong attendance of foreign visitors, coming from all over, who represent a big part of the sales”. These foreign visitors represented some 55% of the 15,000 visitors who attended this 2019 edition.