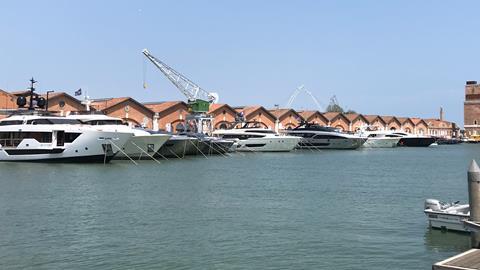 The inaugural Venice Boat Show has been billed a success by the event organiser, attracting some 27,000 visitors over its six day run from June 18-23.

During the exhibition, 43 meetings were held in the venues dedicated to conferences, discussing all aspects of navigation: from the environment to sustainability, to yacht design, accompanied by 8 exhibitions on the themes of boating, the sea and transport.

Key exhibitors included Monte Carlo Yachts, Absolute, Cranchi, FTP Industrial and Ferretti Group which used the show’s locale, the Arsenale, for the pre-show launch party of its new 50-meter Riva. It also used the show for the world premiere of its Custom Line 107 motoryacht.

“The public has rewarded us, we have exceeded 27,000 vistors” - declared organiser Vela Spa through Fabrizio D’Oria, director of Communication, Events and MICE who coordinated the event - “which I consider an important starting point for an Exhibition at the first edition. Venice proved to have a lot to offer. Thanks to the collaboration of all civil and military institutions, in particular the Navy for the extraordinary opening of the spaces at the Arsenale, and to the support of the various Departments of the Municipality of Venice and of its participated bodies, many infrastructural interventions have been realized in the Arsenale that represent the basic point of future editions”.

Significantly the show has the full backing of the city which has confirmed its support for the event for a following two editions. The city is now actively looking to promote itself as a leisure destination for big superyachts. Venice is under increasing pressure from tourism with calls now for a more selective approach to its tourist initiatives – quality, not quantity appears to be the new mantra.

“Venice has become Queen of the Seas in the most wide cultural sense,” claimed Mayor of the city, Luigi Brugnaro. ”We showed our skills in design and architecture, also recovering traditional activities. In these days, Venice has remarried the Sea. As city administration we have already financed the exhibition for another two years. Our goal is that the Boat Show becomes a regular event, in fact we have already begun to collect entries for the next edition. We will treasure mistakes and do even better. We want to have the whole supply  chain, from small to large boats. And, in the next editions, we want to have the whole city involved, not only the Arsenale, as it has already begun to do”.

Alberto Bozzo, Director of Developing Markets at Vela Spa, added: “The enthusiasm we have received from exhibitors and visitors at this edition of the Venice Boat Show is extremely positive and gives us the right motivation to grow significantly for the 2020 edition. We have achieved the goals we had set ourselves and we are certain that the Venice Boat Show will develop and strengthen. Many Italian and international shipyards have already confirmed a presence at the next edition with an answer above all expectations ”.

Speaking to a number of boatbuilders at the show confirmed to IBI that the unquestionable draw of Venice as a premium desitination to lure potential customers was a distinct selling point, though as the show develops logistical issues will need to be addressed - some sort of water shuttle service to and from the event needs to be a priority. More seating, refreshment and shaded areas are a must too.

Dates for the 2020 event are to be announced soon.