In contrast to what was suggested recently at the Cannes Yachting Festival that its IPO was still some way off, the Italian yacht builder, Ferretti, has now confirmed that it will proceed with its proposed initial public offering (IPO) by the end of October 2019.

The company has announced that a placement of new shares to raise €100m will be made on the Mercato Telematico Azionario organised and managed by Borsa Italiana S.p.A. The offering will comprise a primary sale of newly-issued ordinary shares and a secondary sale of ordinary shares held by certain of Ferretti’s existing shareholders in a private placement. 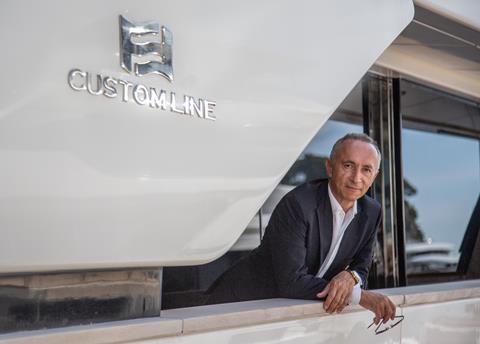 From the placement Ferretti plans to raise around €100m from the issue of new shares which will be used “to support the Group’s growth and development objectives.” The IPO follows in the track of an increasingly strengthening performance in recent years with the group’s management team led by CEO, Alberto Galassi and COO Stefano di Vivo.

As part of the offering, Ferretti will offer new shares to certain key group executives at a discount on the offer price. A customary over-allotment option is also expected to be provided in connection with the offering.

The press statement from Ferretti said: “Each of the Company, the selling shareholders, and the key executives who will subscribe for New Shares are expected to agree to customary lock-up arrangements with respect to their shareholdings for specific periods of time following the Offering. The final structure of the Offering, including the relative size of the primary and secondary component and other relevant terms, will be determined and announced immediately before the commencement of the Offering.”

The Offering is expected to be completed by the end of October 2019, subject to market conditions at the time and receipt of the required approvals by Borsa Italiana S.p.A. and Consob of the documentation pertaining to the Offering and Listing. In connection with the Offering, Barclays Bank PLC, BNP Paribas, Mediobanca - Banca di Credito Finanziario S.p.A. and UBS Investment Bank will act as Joint Global Coordinators and Joint Bookrunners. BNP Paribas will also act as Sponsor for the purposes of the Listing.

The IPO will further boost Ferretti’s financial resources which have recently been added to by a €250m increase to its capital equity. This equity takes the form of a new asset structure of Ferretti SpA.

As a confirmation of the constant support, the main shareholder, Weichai Group, converted a shareholder loan of approximately €212m through an equivalent capital increase. At the same time, Piero Ferrari and Adtech Advanced Technologies signed investment agreements that provide for the injection in Ferretti SpA of a total of €40m through share capital increases.

Weichai, the Chinese state-owned company, is Ferretti’s majority shareholder currently with about 87% and Ferrari with some 13%. In Cannes, Galassi commented about the €250m equity increase saying: “This means we have no debt,” he strongly emphasised. “In 2009 Ferretti had debts totalling around €1bn but today we are debt-free.”