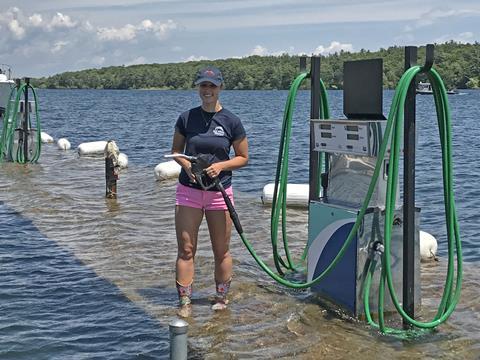 High water levels throughout the spring and summer of 2019 caused more than headaches for Great Lakes marinas, resulting in major damage to facilities and infrastructure at hundreds of businesses

In the wake of record flooding this year that has caused untold billions of dollars in damage, municipalities, ports and marina operators across North America’s Great Lakes region are bracing for further high waters in 2020 as lake levels remain well above typical late November averages.

New data from the US Army Corps of Engineers Detroit District (USACE-DD) confirm that Great Lakes water levels are approaching record-highs for November, at a point when they should be at their lowest point of the season.

Forecasters now predict that Lakes Michigan and Huron – considered key indicators in the system – will enter calendar year 2020 at a level 11 inches higher than that of January 2019. With average winter temperatures and snowpack, that would put the entire region under a high risk for further flooding once the snow melts in spring – particularly if spring rains continue trending toward heavier than average volumes as they have for the previous three years.

But with the higher lake levels already, the USACE-DD cautions that even average spring precipitation could still lead to significant problems.

High water levels this year resulted in massive flooding throughout the Great Lakes region that persisted into late summer, flooding homes, municipal waterfronts and hundreds of marinas, including docks and infrastructure such as electrical, water and sewage treatment facilities. Damages from the flooding are still being assessed, but are expected to be measured well into the billions.

Bordered by the Canadian province of Ontario to the north and the US states of Minnesota, Wisconsin, Illinois, Indiana, Michigan, Ohio, Pennsylvania and New York to the south, the Great Lakes are the largest freshwater system on earth, containing 20% of the world’s fresh surface water. In its 2018 Statistical Abstract the National Marine Manufacturers Association (NMMA) notes that the region ranks among the most important boating markets in North America, having registered the densest concentration of registered boats per household for the past 15 consecutive years.