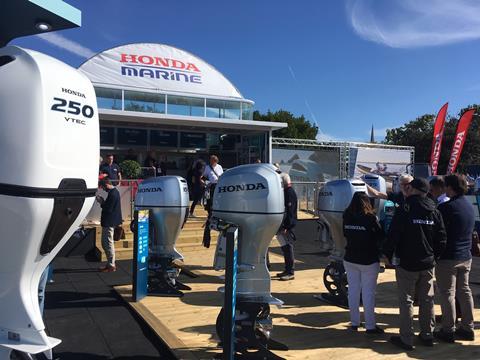 The Honda Marine stand in Southampton

Two new Honda-powered leisure boat ranges – the 4XC line built in collaboration with Italian sportsboat builder Ranieri and the H-Series of RIBs designed and built in partnership with Highfield Boats – made their UK debut at the Southampton International Boat Show today.

Steve Morris, head of Power Products at Honda Marine (UK), unveiled the new models on the Honda Marine stand to a gathering of press. Both ranges, he said, provide the Honda dealer network with a variety of ready-made turnkey packages that are easy for the customer to understand, buy and use. There are six new models in each range.

“Our aim was to make the boat-buying process as simple as possible,” Morris said. “Though each of the 12 boats has a subtly different application, they all come as ready-to-go packages with the most important features included in the price. As a result, there is really nothing to think about except the style of boat, the length of hull, the size of outboard and the pricing benefits that a more streamlined approach bring.”

While Honda has been working with Ranieri in continental Europe for many years, the arrival of the 4XC line in Britain represents the start of their UK alliance. Built on the basis of Ranieri’s soft-riding hulls, the idea behind the new range is to bring a well-equipped family package to market in either Centre Console (CC) or Sun Deck (SD) configuration. 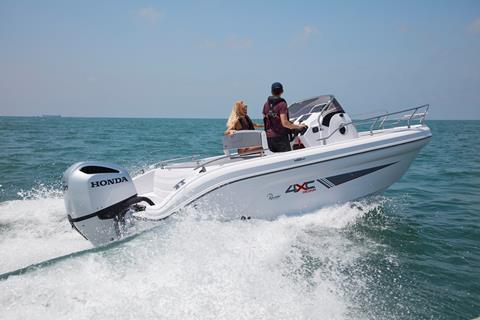 “These are well-designed boats built with genuine quality and typical Italian styling – and they’re based on exceptional hulls that have seen proven sales success throughout Europe for many years,” says Morris.

Stretching from 4.6m-7.6m in length, the new H-Series from Highfield Boats, Honda Marine’s partner for the last seven years, was designed to make buying and using a family RIB simpler than ever before. The design, pricing and fit-out makes them uniquely accessible, says Morris, while commercial-grade aluminium construction makes them strong, lightweight and easy to use.

Steve Harrison, brand development manager at Highfield, told the press at Southampton that the company has come a long way since it was founded in 2011, with turnover last year of just under US$12m. “We are the fastest-growing RIB brand and have been for the last five years,” he said. “We’ve set ourselves very rigorous targets, and with the exception of 2015 we’ve exceeded our target year-on-year.

“We’re building, on average, 4,200 to 4,500 boats a year,” he added. “Since 2011 we’ve delivered over 22,000 RIBs worldwide and we have 40 countries now represented in our network. From a cruising point of view, we have a service centre in all of the major destinations.”

Europe is Highfield’s biggest market in terms of turnover and Harrison expects that to continue well into the future. “When we look at our successful countries in Europe, our successful alliances – Croatia, France, Spain, Italy, the UK – all of them are Honda backed.

”If we look at our number of boat sales of 4m to 7.6m, 75% of sales are with Honda engines. So for us, it was a sensible choice to consolidate that relationship and to build Honda a dedicated range of boats that the entire network can really take ownership of, knowing no-one else will have access to those products.”