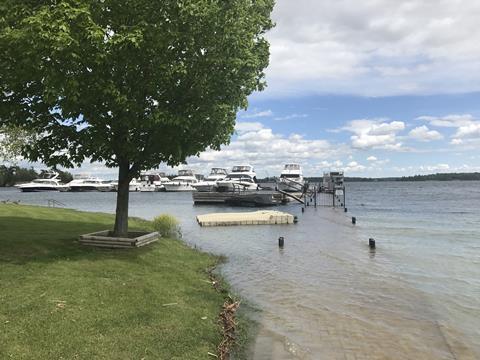 The International Joint Commission (IJC) is coming under fire in the wake of its recent decision to reduce water outflows from Lake Ontario, a move that shoreline property owners say flies in the face of new data released by the US Army Corps of Engineers showing the lakes sitting far above long-term averages.

Water volumes flowing from Lake Ontario into the St Lawrence River and out to sea are artificially controlled by the Moses-Saunders Dam near the Ontario-Quebec border. The dam, operated by the IJC, was adjusted on November 30 to reduce outflow volume by a rate of 20 cubic metres per second, or 1.72 bn litres every 24 hours.

Property owners on the lake, including marinas, are calling for the agency to reverse its decision and resume bleeding off water at the maximum rates possible. Lake Ontario water levels remain well above long-term average volumes, and are presently 16 inches above where they were at this point last year. Property owners are concerned that the high water level coming into winter will result in increased risk of flooding with the arrival of spring rains and runoff from snowmelt.

Shoreline flooding in early 2019 was among the most destructive on record, burying homes, infrastructure and marina facilities under water for months, with damage totals still being tabulated but expected to reach into the billions.

“Managing water levels is obviously a challenge, which has no doubt been compounded by the wetter-then-normal weather that eastern Canada and the eastern US has experienced in recent years,” says NMMA Canada president, Sara Anghel. “Flooding directly impacts marina operators who face significant damage to infrastructure and facilities, while simultaneously reducing accessibility to water and overall boat usage, with far-reaching implications for the entire recreational boating industry. NMMA will engage with the appropriate departments in coming weeks to reinforce the industry concerns already received from Ontario members are heard.”

For its part, the IJC says it is trying to balance the needs of multiple stakeholders located both upstream and downstream of the dam. “As the Lake Ontario water level decreases, velocities within the upper St Lawrence River increase,” explains Paul Allen, manager, policy, programs and communications with the IJC in Ottawa. “This can cause unsafe conditions for navigation, as well as additional shoreline erosion along the river.”

The approach of winter further compounds the problem, he says. Allen notes that water outflow from Lake Ontario must be reduced in order to allow the formation of stable ice cover on the St Lawrence River downstream of the Moses-Saunders Dam. After ice formation is completed, outflows can be safely increased under the ice but the approach brings its own management challenges due to the resulting fluctuations in water level. The timing of ice formation is highly unpredictable, as it depends on both water and air temperatures which are obviously variable from year-to-year.