A Beneteau Oceanis 423 sailing yacht sailed non-stop round the world by a Korean, Kim Seung-Jin, is now on display at Korea’s National Maritime Museum

There are very few people who have successfully sailed solo and non-stop around the world by yacht. Kim Seung-Jin – an adventurer, documentary producer, and sailor from South Korea – is one of them. Having devoted his life to exploring the world, Kim began sailing in 2001 and has undertaken solo sailing adventures in Croatia, the Caribbean and ultimately his solo round the world voyage.

Currently, the Oceanis 423 that Skipper Kim used throughout his around-the-world voyage is on display at the Korea National Maritime Museum as the first non-stop round the world sailing yacht sailed by a Korean. Kim said; “The purpose of my voyage was to send a message of hope to people affected by the Sewol ferry incident and raising awareness about the beauty of the oceans and South Korea as a maritime country. Since the Oceanis 423 has significant meaning for me and the nation, I have donated it to the museum as a permanent outdoor exhibit”. 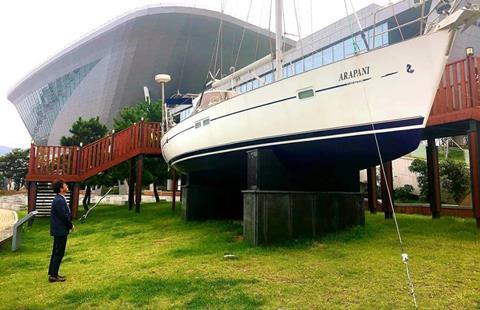 The Oceanis 423 at the Korea National Maritime Museum

Exhibitions at the National Maritime Museum encompass all aspects of marine and ocean life. These include the culture, history, famous figures in the industry, maritime vessels, ocean creatures, ocean life experience, maritime industry, marine territory and development and ocean science. It is one of the top museums in Korea.

The museum holds over 14,000 historic items and relics relevant to the future of ocean life. These are on display in the eight different permanent exhibition halls, the special exhibition hall and the children’s exhibition hall. The museum also has a library, aquarium, grand auditorium, outdoor performance stage, and a 4D theatre offering a multi-cultural experience to visitors.

In 2014 Kim embarked on his round-the-world solo voyage on his boat Arapan a Beneteau Oceanis 423. He challenged himself to make no landfall along the way, and used no power en route during his 210-day-long trip. He returned to the starting point of Waemokhang (a small port on the west coast of Korea) as a hero for the Korean people with his dreams fulfilled, having sailed around 41,900 kilometres in total.

On board the Oceanis 423, Skipper Kim travelled across the Pacific, the Southern Ocean, the Atlantic, and the Indian Ocean, crossing the Equator twice. He overcame numerous difficulties and dangerous situations, including fixing equipment by himself, and encountering huge waves and strong winds when he passed Cape Horn at the tip of South America. He had a narrow escape from drift ice in the Antarctic Circle and had to pass through the pirate-infested Sunda Strait, a film is being produced in Korea based on his adventure.

Sailing is increasing in popularity in South Korea with considerable promotion having been done in the past by the National and Provincial Governments who for the past 10 years have had a policy of promoting a healthy lifestyle for the population.