A £2m investment plan has been launched by the Beaulieu Estate, owners of the Bucklers Hard Yacht Harbour. Under the plan, on which Gosport-based Marina Projects Ltd have been the consultants, an additional 66 berths will be added to the existing 198 making a total of 264. 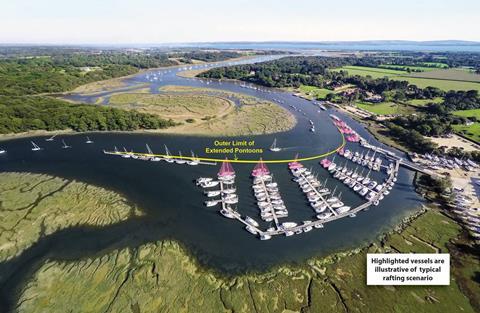 The Yacht Harbour is close to the historical 18th century UK shipbuilding site at Bucklers Hard and the new investment is seen as securing the future of the marina over the next 25 years as one of the most popular locations, while keeping pace with modern demands for bigger berths and coping with increased visitor numbers.

Apart from some changes in 1980 following the opening of the Yacht Harbour in 1971, the new expansion plan represents the first upgrade in nearly 40 years. The new plans have been approved by the Marine Management Organisation and New Forest National Park Authority.

Beaulieu Enterprises managing director, Russell Bowman, said: “The proposals represent a significant investment in the future of the Beaulieu River and are an important part of ensuring that it remains one of the most desirable places to visit and moor a yacht. We recognise that the Beaulieu River is a very special place and are committed to undertaking the project in a sensitive and sustainable way. Its unique character remains of paramount importance to us for its future.”

He added: “The reconfiguration will offer the best possible service for our customers, while keeping a similar look and feel to the existing yacht harbour.”

The private custodianship of the Montagu family has protected the Beaulieu River for over four centuries, as one of the few privately-owned rivers in the world. The estate is working with agencies including Natural England and the Environment Agency to continue to protect its unique habitats and species.

Buckler’s Hard Yacht Harbour was recently awarded The Yacht Harbour Association’s ‘Coastal Marina of the Year (for under 250 berths)’ category trophy. Full marina services; an open policy boatyard and chandlery are offered, along with a range of benefits including free Wi-Fi. A restaurant, bar and tea shop are on the doorstep at the 18th century shipbuilding village of Buckler’s Hard, with its Maritime Museum.

Marina Projects will oversee the work on reconfiguring the marina which will be undertaken through the winters of 2019-20 and 2020-21 to minimise disruption to marina customers out of the main season. The range of work which Marina Projects has been involved included the securing of the necessary approvals for a reconfiguration and extension of the Yacht Harbour.

The ageing life of the pontoon equipment and the need for either replacement or refurbishment provides an opportunity to consider the most appropriate design solution for present and future demand. The initial scope of work included analysis of the local and wider market, historic activity trends, a detailed review of the site constraints, development of concept design options and the development of the business case.

With a preferred concept design that responds to the market demands; recognised the site constraints and maximises the natural advantages of the location, Marina Projects developed a detailed consent strategy and assisted in the stakeholder consultation process.

Mike Ward, managing director at Marina Projects, commented “Buckler’s Hard Yacht Harbour is a gem of Solent marinas, sitting at the heart of the New Forest. The client’s desire to retain the charm and character of the Yacht Harbour within a truly unique setting, whilst at the same time delivering on the needs of the modern boater has added a fascinating dimension to our study work.”