Westhaven Marina, situated in the heart of Auckland, is expanding both on shore and on the water

Auckland’s largest marina is undergoing a huge redevelopment project which will eventually see the addition of over 80 new berths. Westhaven Marina, situated in the heart of Auckland is expanding both on shore and on the water. Not only are there new facilities being built on shore for marine operators, such as brokers and chandlery, but also on the water.

The older pile berths are being taken out in favour floating berths, as they have becoming increasingly underused. Pontoon berths on the other hand are at full capacity and there is a growing demand, especially for larger berths. 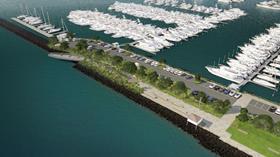 To help alleviate the shortage of pontoon berths, Westhaven Marina have retired all the old pile moorings in favour of 84 new pontoon berths. The development will use existing marina water space more effectively and includes 40 x 20m, 39 x 24m and 5 x catamaran berths.

This will result in a significantly improved utilisation of the water space, consolidating existing moorings with 50 new serviced berths. The design of berths is based not only on current demand but anticipates the future requirements. All long-term pile berth customers are expected to be accommodated in a reconfigured pile berth facility in the north-east corner of the marina.

A causeway is being created by extending the existing northern reclamation using a process of mudcreting where dredged marine sediment is mixed with concrete before being used to construct the new land area. It will provide new public open space including trees, raingardens and a viewing platform, providing new perspectives of the Waitematā and seating and open areas for watching boat-races. It will also provide access to the new piers, and carparking facilities for berth holders.

A key part of the project’s first stage has now seen the closure of the smaller of Westhaven’s two entrances, the Western entrance. This will mean all vessels entering and exiting the precinct will use the one entrance. To facilitate access for deep drafted boats to the northern entrance, the channel will be dredged to 3.7m. The closure of the Western entrance will provide a calmer berthing environment and enable greater amenities and capacity for Westhaven Marina users, including the creation of additional 110 carparks.