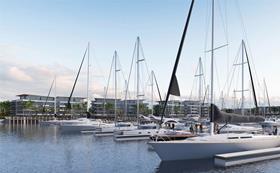 Water-based development and harbour dredging are currently underway for the first phase of a proposed 318-slip, state-of-the-art marina facility being constructed at Burnett Heads on Australia’s Coral Coast.

“With marina projects, creating a safe, sheltered harbour usually becomes the responsibility of the developer,” he said. “In this case, the harbour already existed, and the fact that it is in an idyllic setting surrounded by so many amazing and accessible attractions makes it the perfect location. The strong support we have received from the Bundaberg Regional Council and Gladstone Ports Corporation has also been very refreshing.”

The Gateway Marina complex will be designed in keeping with criteria outlined by the Marina Industries Association of Australia’s Clean Marine program, which align with the internationally-recognised ISO14001 Environmental Management Plan.

“This is a considered, staged development and we want the community to share the journey with us,” said Harvey. “As we move through the consent process for the land-based project, we are launching an introductory expressions of interest campaign for the first 58 marina berths to be built in the first half of 2019 under an existing approval. Following consent for the land-based project, we expect construction to commence immediately on the first of the commercial buildings.”