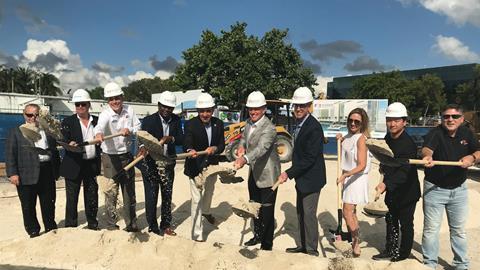 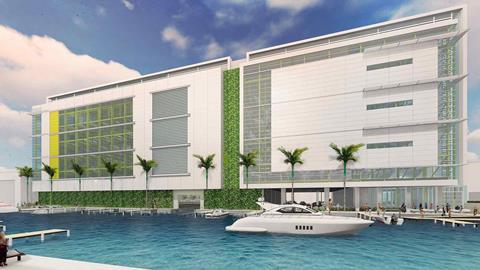 When completed, the F3 facility will be six tiers high

Two-years in the making and just a few months behind its original aggressive schedule, F3 Marina has broken ground on what will be the second fully-automated dry stack marina in the US.

The facility will be six tiers high, housed in a sleek, modern structure designed to withstand winds up to 140mph, with self-contained power generation to remain self-sufficient during an electrical outage.

Think of it as “a giant boat vending machine”, explained F3 Marina CEO David Behnke, in describing the computerised marine crane system that allows for maximum boat storage on a minimal footprint, with boat retrieval times of just minutes.

F3 manages the nearby Port Marina, a so-called Dock-o-minium, where dry stack slips are owned by individual boaters. The automation technology has been fine-tuned at that facility.

“The system worked, but it was just a little slower, so we improved the software so the system functions more efficiently. When we first put the system in there, I think it took 10 minutes to get a boat in the water. Now it’s about four minutes,” F3 Marina president John Matheson told IBI.

Working with the automated crane engineering firm Trutegra, F3 expects to cut the time even further.

“[F3 Marina Fort Lauderdale] is a bigger facility – about double the size – so want to have a boat in the water between 3 and 3.5 minutes, depending on where it is located,” Matheson said.

The company began taking deposits from boaters at the 2018 Ft Lauderdale International Boat Show, and reports a projected 20% occupancy, according to Matheson, who adds a large part of the appeal – besides being minutes at idle from open ocean – is the automation system.

“Everyone knows the inherent risks of some kid driving around a fork lift swinging their expensive boat around. It’s not unheard of to see boats come flying off a fork lift,” Matheson said. “Here, it takes the human error element out of it,” adding in 10 years of operation, the system at Port Marina had never damaged a boat.

The 1.3-acre site will include a private lounge, indoor car park, high-speed fuel service and storage, with 21 wet slips for staging boats awaiting customers or return to berth.

The project is scheduled for completion in “late winter of 2020” at a cost of “several million dollars” but no specifics were provided.

F3 currently owns or manages nine marinas in the US, representing 2,800 slips, with a growth plan targeting 10,000 slips over the next five years; with plans for up to 10 automated dry stack facilities worldwide with a focus on the US, Asia, the Emirates, Canada and Europe.