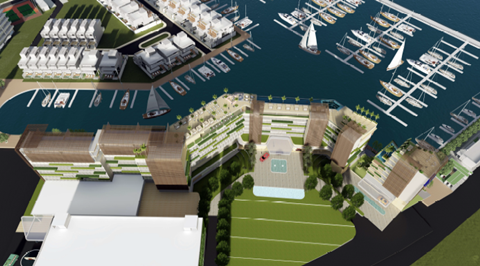 French marina developer Poralu Marine has been chosen to design and build a new marina for Argo Yacht Club in Tainan, Taiwan.

The ground-breaking ceremony, held at the end of January, officially launched the construction. It gathered together Argo Yacht Club CEO Mr Ho, along with representatives of the local authorities and the project team.

The marina is at the heart of a comprehensive development project. The leisure port and its yacht club will be integrated into a complex of high-end restaurants, shops, hotel and villas. It will be fully equipped to comply with the highest international standards, and has been designed to withstand the tropical storms and typhoons that frequently hit the island.

“Our extensive experience in designing and installing marinas in extreme weather locations was a key success factor,” says Christophe Saune, Poralu’s Asia-Pacific area manager. “Argo Yacht Club is one among many projects we have been involved in in the area, and we know how rough and frequent typhoons could be in this region.”

This is the second largescale project that Poralu Marine will be installing in Taiwan with its local partner, Royal Regal Waterfront Development. The first one – the Taiwan International Yacht Club – is located in Danshui in the north of Taipei.