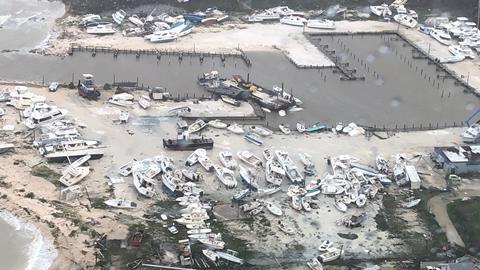 While reports of the devastation caused by Hurricane Dorian over Great Abaco island, Grand Bahama island and other islands are only just filtering in, it is inevitable that significant damage will have been caused to the marine infrastructure of these two main islands, both important yachting locations.

The latest death toll is 30 people over the Bahamian islands hit by Dorian and expected to increase considerably. With the total devastation caused across both the main and smaller islands, at such places as Marsh Harbour, the cost of reconstruction will run into billions of dollars.

So much damage was caused across the two islanda and especially Great Abaco island because Hurricane Dorian as a Category 5 storm held is position over the islands for around two days. Pictures showing the disaster show a number of yachts and other craft that have been driven ashore through the storm.

The Abaco Beach Resort & Boat Harbour, which offers 198 berths for yachts up to 200ft, has a post-Dorian report which states that clean-up teams are already at work and that only limited services are currently available.

The Moorings yacht charter company has a base at Marsh Town. In a statement their marketing manager, Ian Bockman-Pedersen, said: “Right now it looks like total devastation in that island. Representatives from The Moorings are on their way to the Bahamas right now to make sure all their 25 employees are ok. Some are in the shelters. Some hunkered down in their homes. But we just have no way of contacting them.”

The Moorings had about 30 boats based in Marsh Harbour, some were moved in time. The rest are likely destroyed but the workers are the key priority. “These are people that you talk to on a daily or weekly basis,” he commented.

While they wait, The Moorings employees are collecting supplies. They hope to fill up the break room and use their boats to bring all the stuff to those who need it. Two years ago, Hurricane Irma destroyed The Moorings marina in the British Virgin Islands.