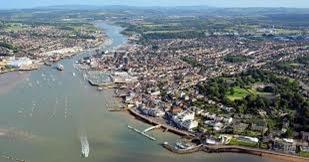 Cowes has a strong yachting heritage

In two recent actions, the UK’s Isle of Wight (IOW) Council has taken steps to buy key buildings related to the island’s important marine industry and released the latest masterplan for Newport harbour.

Within the IOW’s marine sector, yachts play an important role, with Cowes being a very historical location for yachting. Furthermore, Wight Shipyard based in Cowes will be the yard building the new Arksen yachts with the construction of the first, an Arksen 85, just started.

The IOW Council plans to buy Venture Quays, which is sited on the Solent waterfront at East Cowes. The purchase will involve four buildings which are collectively important to the IOW’s marine sector and the acquisition will be funded by regeneration funds approved by the council in its budget for 2019/20. The purchases will be made from the Homes England agency but a price still has to be agreed.

The buildings include the large Columbine Building, well-known for the big Union Jack flag depicted on its front. It is located right at the entrance to Cowes and it has both marine industry history and current manufacturing going on within it.

The group of buildings in this planned purchase also includes the Victoria Barracks building, the Albany warehouse, and a Maresfield Road site currently used for car parking. Approval to continue negotiations on the purchase was given at the latest council meeting. What the purchase of this group of buildings will mean is that the council will be able to continue the marine and associated industries at Columbine as well as developing employment opportunities for the marine sector both in East Cowes and across the island.

This whole area was previously part of a major development project that would have also included a 400-berth marina to add much needed capacity for the island’s marine leisure market both for locally-based and visiting yachts. The contract to develop the site and the marina was awarded to a company associated with Camper & Nicholsons Marinas but due to disagreements this partnership has now ended. It is not known whether the council still plans to develop the proposed marina or if they are talking with any potential parties to move forward on its construction.

As to Newport, following two years of consultations a new harbour masterplan has been completed which includes the latest plans to redevelop the harbour and quay area in the centre of the IOW’s historic county town.

The project is intended to increase connectivity to the existing town centre, attract visitors, and ensure the future of the harbour by providing for maintenance and investment in harbour facilities. The new masterplan envisages the retention of as many existing buildings as possible and reuse them as part of conserving and enhancing the historic and maritime heritage of the Newport quay area. Most of the new proposals relate to the estuary’s eastern part, so retaining the Medina river for boating. This will leave the western side for commercial development which includes the existing marine and boating activity.