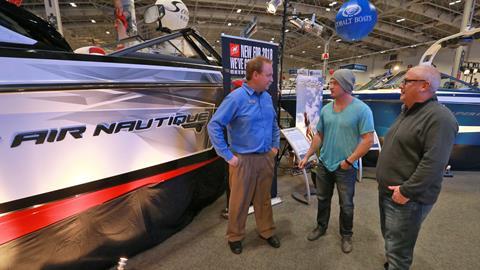 NMMA Canada has announced that it will release the first two instalments of its 2018 Statistical Abstract on May 10, providing critical insight into the actual market impacts of retaliatory tariffs on US-made boats imposed last July by the Canadian government.

As it has for the past several years, the trade group will release its annual compilation of Canadian market data in sections, beginning on May 10 with the Economic Facts and Retail Markets components. Data on the pre-owned market will follow near the end of the month, with the final Import/Export section scheduled for release in June. NMMA members can access digital versions of each section on the nmma.ca website as they become available, in addition to the full compilation report.

Excerpts from the Abstract released to media note that new boat sales in Canada totaled 41,700 units in 2018, representing a 7.0% year-over-year increase over 2017 levels. The inboard-powered ski/wakeboard boat category lead the way with a 16.0% YOY increase in unit sales, followed by personal watercraft (13.0%), inflatable boats (6.0%) outboard-powered boats (6.0%) and inboard-powered cruisers (4.0%).

Outboard engine sales were reported as reaching 42,700 units in 2018, up 2.0% over the previous year. Corresponding dollars increased by 8.0% to C$348.5m. Estimated retail dollar sales for new boats and outboard engines combined climbed a healthy 21.7% to nearly $2.5b.

“What is important to recognize is that the sales increases for the 2018 season were all achieved between January and the end of June, as Canadians accelerated purchases in anticipation of the retaliatory tariff on power boats, sailboats and inflatables that was imposed by Canadian government on July 1,” said NMMA Canada president, Sara Anghel. “Sales levels in the wake of the tariff, from August to December, were softer.”

In response to new US tariffs on imported steel and aluminium introduced last spring, on July 1 the Canadian government levied its own retaliatory tariffs on a wide range of products imported from the United States, including a new 10% levy on boats. With a majority of the boats sold in Canada being produced in US factories, a number of Canadian dealerships accelerated inventory orders in the second quarter before the tariff took effect, while consumers also accelerated big-ticket purchases in order to avoid anticipated price increases.

“Even though the tariffs have clearly had a negative impact on new boat and engine sales, this new data underscores the significant contribution of the recreational boating industry to the Canadian economy,” said Anghel. “Across Canada the boating sector represents more than 75,000 jobs, making it a key employer – especially in rural communities which may offer limited opportunities.”