New boat registrations saw a sigificant boost in the first half of the year, helped by warm, early Spring weather

The popularity of boating continues to grow in Finland according to figures released by Finnish Marine Industries Federation, Finnboat. Early in the year, the number of new watercraft registrations in Finland increased by 8% over the previous year. Small motorboats provided most of the impetus, as their registrations were up by 14%, a substantial increase. Their popularity goes to explain why small outboard-powered boats make up a majority of the altogether more than 280 boats exhibited at the Helsinki Boat-Afloat Show opening this Thursday. Finnish boat exports increased by almost 10% over the corresponding period a year ago.

*Registration is mandatory for boats at least 5.5m in length, with an engine 15hp or bigger

The warm spring weather accelerated boat sales in Finland, with the active sales period starting earlier than last year. These are key factors behind the growth, according to Jarkko Pajusalo, managing director of the Finnboat.

In January-July, a total of 3,459 watercraft of different types were registered, which was 251 more than in the same period one year earlier. “Boating has gained an increasingly stable position as a pastime among Finns, and particularly the sales of small motorboats less than 5.5 metres long have increased.  Brands manufacturing small boats, such as Suvi and Terhi, are enjoying strong growth,” Pajusalo says.

The Mikkeli-based Suvi was Finland’s fourth most popular motorboat brand early in the year, with registrations up by 21%, while Terhi, the brand from Rymättylä, held the sixth position and achieved a 25% increase in the number of registrations. Among the most popular boat brands, the quickest rise was exhibited by Falcon, the new aluminium-hulled boat from the Kuopio-based Bella, with 107 new boats registered.

The top positions in the registration statistics were again held by Buster and Yamarin, with 407 and 344 registrations, respectively. Overall, new motorboat registrations were up by 7%. In Finland, official registration is mandatory for boats that are at least 5.5m long or equipped with a 15hp engine or bigger. 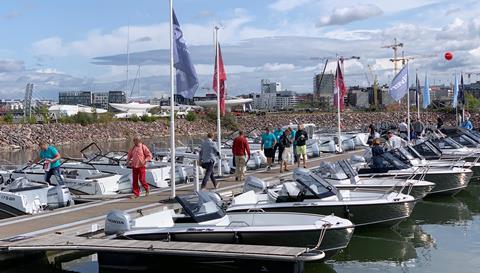 The most prevalent boat type on the Nordic market is the all-round console boat, 5-6m in length, equally well suited for boating trips, recreational fishing, water sports and commuting.

Of all the motorboats registered during the early part of the year, 87% (2,051 boats) were less than 7m long.The list of the most popular motorboats is strongly dominated by domestic manufacturers; the most popular import boat is the Russian-built Volzhanka, with 24 boats registered in January-July. “The Finnish boating industry knows the Nordic market well, and the most important boat type on this market is the all-round console boat. This can also be seen at the Helsinki Boat-Afloat Show, where no other boat type comes forth at the piers as numerously as outboard-powered motorboats 5 to 6 metres long. They are equally well suited for boating trips, recreational fishing, water sports and commuting,” Pajusalo says. The registrations of boats over 9m in length numbered over one hundred during the review period. In cruisers and commuters, the most popular brands were Grandezza, Targa, Nimbus, Sargo and Nord Star, with a combined total of more than 60 registrations.

The sales of new sailboats also picked up substantial momentum, as altogether 21 sailboats over 5.5 metres long were registered during the period, almost twice as many as the year before.The previously wild growth rate of personal watercraft sales slowed down, but the category still posted a growth figure of 8% (982 PWCs sold, +74 units compared with one year ago). In the previous year’s corresponding period, the number of new PWCs sold had increased by almost 300 units.

Managing director Pajusalo said: “Finland is an opportune market for small boat engines, and boating as a pastime is enjoyed by wide circles of Finnish people, thanks to the diversity of the country’s waterways, the 168,000 lakes and the extensive archipelago.”

Although electric boat motors have seen their rapid popularity growth level off, they continue to be in high demand. Altogether 5,390 electric motors were delivered in January-June, roughly as many as in the same period a year before. According to the statistics on wholesale deliveries, a total of 7,385 internal-combustion outboards were delivered to Finland between January and June, which was 30 engines more than over the corresponding time span one year ago. Overall, 17,723 outboard engines (+11%) were delivered through Finnish importers, with 10,338 of these engines re-exported elsewhere. Boat exports increased by almost 10%.

At this point of the year, customs statistics on Finnish boat exports are available from the period January-May. According to the statistics, the total value of boat exports over the first five months of the year increased by 9.4% over the corresponding period a year ago.The most significant export countries were Sweden, Norway, Germany and Russia. The total value of exports was €113.4 million, almost €10 million more compared with the same time frame in the previous year. Altogether 6,572 boats were exported, almost 500 more than in January-May a year ago. 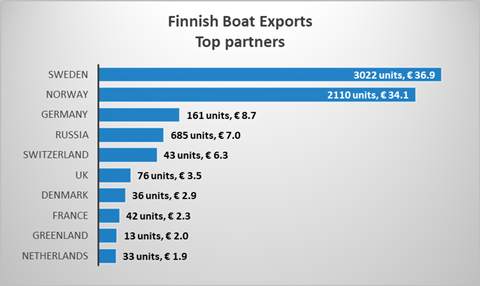 Sweden and Norway represent very significant markets for the export industry; they were the most important export destinations both in terms of number of boats and export value.The total value of exports to Sweden and Norway amounted to €37 million and €34 million, with over 3,000 and 2,110 boats exported, respectively. The value of exports to Sweden fell by almost 8%, whereas that of the Norwegian exports rose by 3%. Germany overtook Russia as the third-biggest export destination, with 161 boats exported for an aggregate value of €8.7 million. The value of German exports increased by more than €5 million over the previous year’s corresponding period. The value of boat exports to Russia increased by almost 20%, and the growth was even faster in terms of number of boats (685 boats exported, total value €7 million). Large sailboats accounted for more than €10 million of the total value of exports. The most expensive boats exported were two yachts, one of which was delivered to Germany and the other to Switzerland at a price of €4.2 million and €3.4 million, respectively.

The total value of boat imports was €41.9 million, up by €1.4 million (3.5%) on the previous year. Of this total value, two-thirds was accounted for by personal watercraft imported from Mexico, declared to customs in Finland and re-exported to other EU countries. In actual boat imports, the most significant import countries were Poland and France.

Boat imports from Mexico are primarily personal watercraft which are re-exported, making Poland the largest source of traditional boats imported to Finland. (Jan-May 2019)

The value of boat imports from Poland increased by almost 60% (€3.6 million, 154 boats), while the value of boat imports from France increased sevenfold from the corresponding period a year earlier (€2.8 million, 62 boats). The imports from Poland consisted of small and large outboard-powered boats and larger inboard-powered or sterndrive-powered boats, while those from France were mostly larger inboard-powered or sterndrive-powered boats. Russia also emerged as a significant import country, with the total value of imports increasing almost hundredfold to €1.5 million. The Russian imports were mainly aluminium-built small boats.