Growth in unit sales, dollars forecast to continue through 2019 season 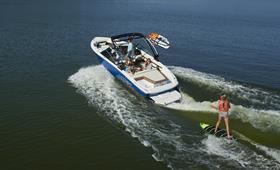 “The recreational boating industry has been on a seven-year climb that’s expected to continue into 2019, bringing even more people to the water,” said Thom Dammrich, NMMA president. “Driving these sales is a combination of the economic growth we’ve seen over the past decade, particularly with consumer confidence hovering near all-time highs and consumers seeking out boating as a way to spend quality time with family and friends outdoors.

“At the same time, over the past five years, marine manufacturers have put a concerted effort on offering new products that attract consumers with different interests and budgets, bringing out new buyers – especially across the watersports, fishing, and pontoon categories – three categories seeing unprecedented sales growth.”

Sales increases for freshwater fishing boats and cruisers between 22ft-32ft were both reported to have increased from 2%-4% year-over-year, reaching volumes of 75,000 and 9,000 unites respectively. Sales figures for sailboats are calculated separately, and will be released in February.

NMMA’s forecast for 2019 remains positive despite continuing trade tensions, with continued growth expected to deliver a YOY retail sales increase in the range of 3%-4%.