More than 40 members so far signed up including key names like Ferretti Group,  Fincantieri Yachts, Perini Navi and Baglietto

The Confindustria Nautica General Council, the new name for the reunified UCINA and Nautica Italiana associations, convened last week in Genoa to formalise the addition of a number of new association members while also launching the process to integrate the respective governing bodies of the Association into the Council and Industry Assembly. Candidates are now putting their names forward for the Recreational Ship sector, in view of the elections, the dates of which will be confirmed next month. 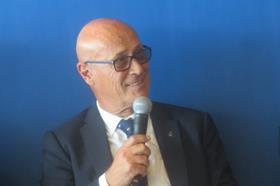 Cecchi’s instrumental contribution to the reunification process, has been invited to continue at the helm of the Association to bring its current development to completion.

Baglietto Spa and Cerri Cantieri Navali Spa (both under the Gavio Group), the Ferretti Group,  Fincantieri Yachts, Perini Navi Spa, Anvera/Lg and Sacs, are among the many boatbuilding brands to have joined over the past few days. They are joined by Mase – in the Accessories/Components sector; Marina di Portofino, Marinedi Group and Porto Lotti, from the marina sector; and Compagnia Generale Telemar in the Services field. Design studios Zuccon International Project and Francesco Paszkowski Design have also joined.

“We are continuing to make progress, many more additions to our roster of businesses are already in the process of being formalised,” commented Confindustria Nautica president, Saverio Cecchi, who added– ”I would like to give special thanks to Lamberto Tacoli for having shared this journey with me, a journey that has led to such an important day in which I have the great pleasure of welcoming our new Members”.

The last few weeks has also seen a number of other company groups join Confindustria Nautica including AON, Italian and global leader in risk and HR consultancy and in insurance and reinsurance brokerage; Boero, ISYBA (the Italian Ship and Yacht Broker Association), Coast to Coast Investimenti srl and Pressmare, a leading online news platform.

The total number of applications to join Confindustria Nautica is now close to 40, including those from historical brands such as Nautica Glem (Catania) and Peter nautica (Bari) – among the largest operators in Sicily and Puglia – a number of hallmark names like Marina Verbella and Solcio, based respectively on the Lombardy and Piedmont banks of Lago Maggiore, one of the leading names in the North West Maresport team (Padua); one of Milan’s key network hubs, Nautisport, along with Oltre Nautica in Rome, Campello Marine in Venice, Punto Mare in Ancona and, says Confindustria Nautica, many more are joining from across Italy.

The Industry Association’s General Council has confirmed their intention of involving new members as soon as possible in the Industry Assembly’s activities to benefit the most from their ideas and proposals.

The Council, aware of president Cecchi’s instrumental contribution to the reunification process, has invited him to continue at the helm of the Association to bring its current development to completion.

The reunification of UCINA and Nautica Italiana began last year. The assemblies of the two associations, which took place respectively on December 18 and 19, approved the changes subsequently made to the UCINA statute, as approved also by the Members of Nautica Italiana, chosen to be taken on as the unified Association’s own statute, since UCINA was deemed to become the common home for both institutions, and adopted the name Confindustria Nautica.