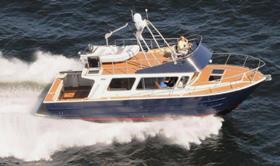 Canadian aluminium boat builder Bolton Marine Group announced this week that it has acquired Daigle Marine, a British Columbia-based manufacturer of welded aluminium yachts and commercial workboats. Terms of the transaction were not disclosed.

Under the deal, Daigle Marine will continue to operate from its existing facility on Vancouver Island as a wholly-owned subsidiary under the leadership of managing director, Torry Wannenwetsch. Founder Steve Daigle and former co-owner Bob Kristmanson will remain active in the business for an unspecified period as the business transitions to its new ownership.

Founded in 1985, Daigle Marine manufactures a diverse range of heavy-duty welded aluminium fishing boats, yachts and commercial workboats which are sold under the EagleCraft name. The company launched its largest custom yacht – a 53ft, $2.8m luxury sportfishing model for an American buyer – in August 2018.