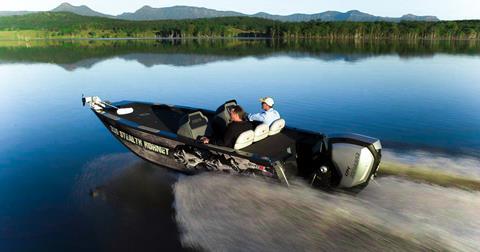 Telwater is an Australian leader in aluminium boats

BRP’s purchase of the iconic Australian boat and trailer builder, Telwater, completes what both sides of the transaction look at as “the perfect marriage”.

Telwater CEO Paul Phelan, who sold the Canadian-based BRP 80% of his company back in May, told IBI at the Sydney International Boat Show (SIBS) that despite the emotional rollercoaster the process has had him riding for the past year, the timing for the sale of the company he founded was right.

“I’ve owned it for 32 years so it’s a little different, but Telwater has over 50% market share in Australia. I’ve grown it from a A$2m company to A$100m and we can’t get any more growth. I was looking for a way to go forward.”

Phelan, has been working with BRP since 2012 as a distributor and packager of BRP products, said the two organisations are “very much aligned on their attitudes toward the dealers and the products, so to me it looked like the perfect marriage.”

Sam Heyes, BRP’s director of Key Accounts and Strategic Priorities in Australia, said the companies’ presence in Australia since the 1960s, along with the existing business relationship between the two, made sense.

“For BRP, you look at the marine industry it’s a big industry and while we’re a small player in that industry but there’s a lot of scope for growth and Telwater is a great company full of innovation, it’s got good product and like-minded thought process between the two companies.”

With a large chunk of the market on an island nation, Phelan said any real growth opportunity was offshore. But he was better at boatbuilding than exporting.

“I went to the States in 2002 and left there in 2005. We tried it in the States, but we needed an international partner; someone with the dealer network and everything else. My belief is, if a business just does what it does, then it’s dying. It’s got to keep growing and the opportunity is here with BRP.

“The market has changed. You look at our sales; the dollars are the same as before the global financial crisis, but our numbers are less.

“So, the size of the boat has gotten bigger,” Heyes interjected “and there’s been a shift away from fibreglass to more aluminium.”

The move away from fibreglass hulls was no surprise to Phelan, who said aluminium works for both the builder and the boater.

“You go and build a fibreglass boat and you pay for a new set of moulds, you’re paying millions of dollars. For me, if I need a change in a chine line, I decide to do it today and next week I have a change in the chine line, and if there was an issue, it’s fixed.

It’s much more adaptable and the ride in our 7m aluminium boat is as good as any fibreglass boat, and the consumer knows that now.”

Both sides have had nothing but positive feedback regarding the sale.

“Some of my dealers were a little bit surprised. But nothing bad. I think they see this as a natural progression of the business. I’ve always been an advocate of boat, motor and trailer packages which is what I’ve been doing with BRP since 2012, so the consumer gets a better product. The consumer gets a boat, a trailer that’s built for the boat, and a boat that’s built for the engine, so he ends up being a better customer and were going to end up with more customers.”