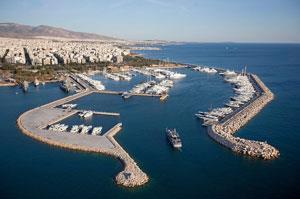 Flisvos Marina is a major superyacht hub in Greece

The 50% stake in the Athens superyacht facility, Flisvos Marina, owned by Turkey’s Dogus Group has reportedly been sold to Lamda, owner of the remaining 50% share. According to Greek newspaper Kathimerini, the sale was achieved through an agreement that Lamda had with Dogus, giving the former a first refusal to buy the stake.

Flisvos Marina is a major superyacht hub in Greece, offering some 303 berths for yachts from 15m-70m (49ft-230ft), of which half are able to berth superyachts of over 30m (98.5ft) in length. The marina achieved the top-ranking 5 Gold Anchors Award Platinum accreditation during the ICOMIA Marina Conference held in Athens in October 2018.

The timing of this reported sale is significant following, as it does, the approach by Luxembourg-headquartered private equity company, CVC, to buy Dogus’ marina operations in Greece, Croatia and the UAE. Flisvos Marina was one of the four such facilities in Greece involved in the CVC deal.

At the recent Sea Tourism conference held on the day before the start of boot Düsseldorf 2020, Stavros Katsikadis, managing director of Lamda Flisvos Marina SA, hinted to IBI that other parties might come forward in response to the CVC approach.

Lamda is a real estate management and development firm listed on the Athens Stock Exchange. It is part of the Latsis Group, whose wide interests include shipping and energy.

According to the report in Kathimerini, Lamda Development paid €12.9m for the 50% stake.

As far as the potential CVC deal is concerned, the three other Greek marinas are the facilities at Zea in Piraeus, Gouvies marina on the island of Corfu, and Lefkas Marina on Lefkada. In addition, there are three marinas in Croatia and four, including the Dubai Harbour project, in the UAE. The Dogus-owned and operated marinas in Turkey and Montenegro are not included in the CVC approach.