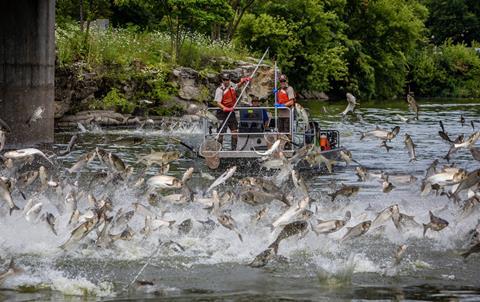 The State of Michigan has pledged US$8m in new funding in its latest efforts to keep three species of invasive Asian carp from entering the Great Lakes.

Dan Eichinger, director with the Michigan Department of Natural Resources, said the funding will be used to cover preconstruction, engineering and design expenses against a new, multifaceted system of structural and non-structural barriers to be installed at the Brandon Road Lock and Dam located near Joliet, Illinois – considered a critical pinch point for keeping bighead, silver and black carp out of the Great Lakes.

The funding approval comes on the heels of a November 1 announcement confirming that 76 of 414 water samples taken from waters connected to Lake Michigan tested positive for environmental DNA (eDNA) for invasive carp. Although no live carp were found in the recent sampling, the results revealed significantly higher carp eDNA than had previously been discovered in previous tests.

“Our economy and way of life in Michigan depends on the preservation of our water, but right now, the threat of invasive species like Asian Carp is putting the future of our Great Lakes and our economy at risk,” said Michigan Governor, Gretchen Whitmer. “The threat of Asian Carp is not new. It has grown to the point where we cannot afford to delay action.”

Asian carp have long been recognised as a threat to the Great Lakes and the region’s $7bn recreational fishing industry. The fish gained access to the Mississippi River system in 1995 following escapes from aquaculture facilities, and have since established large, naturalised populations across much of the central and eastern US, including portions of the Chicago River where live fish have been captured only nine miles from Lake Michigan.

The US and Canada have collectively spent millions in collaborative efforts preventing them from spreading further. Asian carp have been shown to deteriorate local habitats used by native species by uprooting vegetation as they feed. The fish are known for leaping into the air when spooked by approaching boats, and dozens of people have been seriously injured in collisions between open boats and the airborne fish, which can weigh more than 20 pounds.