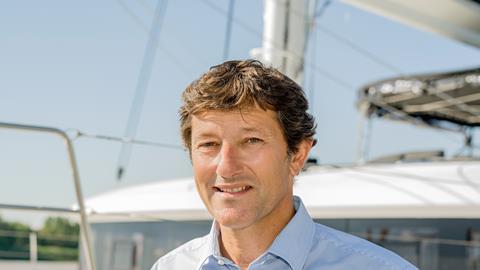 Groupe Beneteau has announced Yann Masselot’s appointment as Chief Executive Officer of Construction Navale Bordeaux, taking over from Dieter Gust, this subsidiary’s longstanding manager and founder, with effect from September 1, 2018.

Yann Masselot is an IEA Paris – Institute of European Affairs graduate and has an MBA from Audencia Business School. He joined the Groupe Beneteau 25 years ago and has built up unique knowledge of Construction Navale Bordeaux, where he held various sales roles from 1999 and was Deputy CEO from 2016.

He will continue in his role as director of Lagoon.

This handover is in line with the gradual transition targeted by Dieter Gust after 31 years as chairman and CEO of Construction Navale Bordeaux since it was created in July 1987. Dieter Gust will continue in his role as Chairman of the Board of Directors of Construction Navale Bordeaux and will help the Management Committee to meet its objectives, from both an industrial and a strategic perspective.

Hervé Gastinel, Groupe Beneteau’s Chief Executive Officer: “The Group would like to thank Dieter Gust for the outstanding work accomplished not only in Bordeaux, but above all for the entire Group. I have every confidence in Yann Masselot’s leadership and expertise to ensure that our Lagoon and CNB yacht builders brands achieve their goals and successfully launch our new catamaran brand EXCESS”.