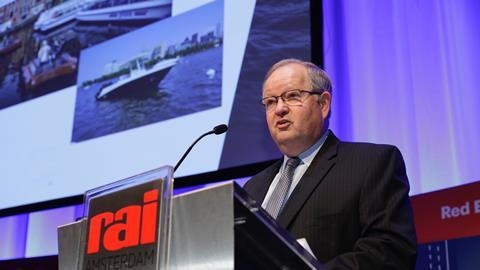 Mark Schwabero, chairman and CEO of Brunswick Corporation in the US, retired at year’s end with the industry enjoying eight straight years of growth and Brunswick’s stock having recorded several 12-month highs.

Mark Schwabero, chairman and CEO of Brunswick Corporation in the US, retired at year’s end with the industry enjoying eight straight years of growth and Brunswick’s stock having recorded several 12-month highs.

The industry then and now

“I guess I was really surprised about how fragmented the OEM side of the business was. You know, a thousand boat brands and very, very fragmented. A big difference from commercial vehicles, the marine side was really focused on the initial sale of the boat. When you looked at the dealers, everything was about the selling of the boat and not as much on the backside; the service and support and everything that goes around it.

“The technology side did cause some consolidation [from 2-stroke to 4-stroke]; it clearly put Yamaha and Mercury in an even stronger position. The boats are a little less fragmented than they were in the past. I think there are things afoot today that are starting to get people focused on the service and support and the aftersale and addressing some of the hassle factors of owning a boat.

“A boater is going to have the same kind of aftersale support on the boat as he does on many other things he purchases in his life, such as an appliance or automobile or other thing. It’s going to be natural to have that expectation and I don’t think the marine industry is at that place today.”

“I think the industry did a pretty damn good job of weathering the Great Recession, let’s not forget that. I think we came out of the recession as a much more unified body, and one of the most visible examples of that is the American Boating Congress in May. It used to be 100 or 150 people, and today there are hundreds of people that show up for that event and it’s a broad representation of the marine industry. I think the Great Recession brought the various constituencies in the industry into a more unified voice.”

“Leading Mercury through the recession and really the whole two-stroke to four-stroke conversion. I became president of Mercury in the autumn of 2008. Those weren’t easy days, laying off hundreds and hundreds of people; you know, you’re affecting communities.”

“Technology is just going to keep increasing in this space and we need to make sure that the capability really is there to support that technology for the buyer.”

“I’ll probably pick-up some outside boards, and do that; there’s some non-profit work that I really want to do as well. I’d really like to focus on undergraduate education at a college level, and I’m working on that. I have a long “Honey Do” list the last couple of years made it difficult to reduce and I have four grandkids that all live within 10 minutes of my house.

“I have two boats and I’d be embarrassed to tell you how many hours I put on my boat last year. I have a boat in downtown Chicago and a boat where I grew up back in Ohio, and I look forward to being able to spend more time there with family and friends, so boating will clearly be part of how I use my time.”

Mark Schwabero joined Brunswick in 2004 as president of Mercury Outboards after a 28-year executive career in the automotive and commercial vehicle industries. He became president of Mercury Marine in the autumn of 2008 as the US was entering what would become the ‘Great Recession’. Six years later he was named president and chief operating officer of Brunswick Corporation, and then, in 2016, became chairman and CEO