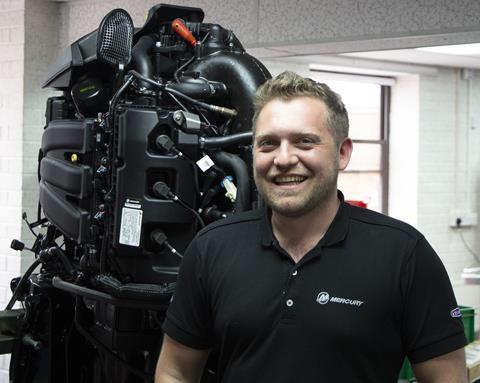 Matt Dayman has worked alongside Barrus for 10 years

EP Barrus Ltd, the UK-based engine importer and distributor, has appointed Matt Dayman to the newly created role of application and technical support engineer for the Marine Leisure Division.

Dayman’s career began with an apprenticeship at Sunseeker before progressing to warranty engineer. His experience has since continued at Barrus authorised dealership RIBs Marine, working on Mercury inboard and outboard engines as a marine engineer.

“Having worked alongside Barrus for 10 years, Matt was a clear first choice for the role,” commented Ben Allen, general manager for the Marine Leisure Division at EP Barrus.

Dayman’s appointment comes not long after the “unprecedented success of Mercury’s V6 and V8 platform” and the most recent launch of the Mercury Racing 450R.

His new role will be dedicated to boatbuilders and focus on these new engine platforms in addition to the Mercury Racing Verado 400R.

Dayman will work alongside the EP Barrus sales team in addition to authorised dealers and boatbuilders to enhance the level of service and support.