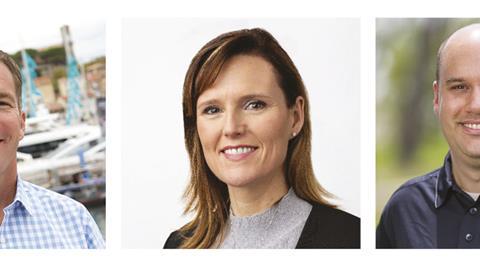 When Brunswick Corporation (BC) launched its OnBoard Boating Club in October of last year, Cecil Cohn, president of Brunswick Boating Services Network, said the company would need 100 to 150 locations to have a true national footprint in the growing boat rental trade. BC achieved that and more with the purchase of Freedom Boat Club (FBC), the company that essentially started the “sharing economy” model some 30 years ago. FBC has 170 locations in 30 US states, Canada and Europe.

IBI talked with Cohn, Brenna Preisser, president – Brunswick Business Acceleration, and FBC president John Giglio shortly after the acquisition was announced to employees toward the end of May 2019.

Will OnBoard and Freedom be separate operations and concepts or will they be merged into one unit?

CC: “We’ve forged a number of really important partnerships through the OnBoard platform. As an example, our partners at Suntex [Marinas] have been instrumental in us learning more about the space and helping us gauge how attractive this segment was, and so we intend over time to figure out in a very thoughtful manner how we can best integrate everyone moving forward and that will require some conversations with partners and with John and his team. I think there are a number of different avenues where we can execute that, so there’s not one right answer. There are going to be many right answers on that front. But this acquisition is clearly the foundation for our strategy moving forward.”

John, does being acquired by the likes of BC validate your platform and what you saw when you bought the company in 2011?

JG: “Historically the boat clubs have always been on the outside of the mainstream industry, so it’s not just validation but it’s also recognition that the industry is changing and I think Brunswick’s acquisition here is going to continue to help grow the industry, and that’s the big thing for me. Their forethought, not only initially with OnBoard, but the fact that they are putting so much effort into this space is really the direction and the future of the industry, I think.

What was the strategy that went into this decision?

BP: “Our objective here is, in partnership with Freedom, to engage as many consumers in the industry as possible. There is so much passion and energy around the industry and it is also, really, to shape the future of boating experiences. We think there is a large market; there are a lot of consumers today that, if there were the right solutions, would participate on the water, and so, our goal is not only to support and strengthen this business model – because it is a great business model – but also, how do we really grow participation in the industry?”

In five years FBC has doubled locations and tripled membership. Is that type of growth sustainable?

JG: “When you look at the overall participation in boating, not relative to boat ownership, but just participation, there are so many people that recreate on the water. So, there is a pool of people that typically would not be in the market to buy a boat but there in the market to get out on the water, so I think the pool is much larger for the consumer that we track than the typical boat purchase arrangement. I think there is an unlimited amount of people out there. The only barrier to growth, for us, quite honestly is marina space and slip space. As long as we continue to have access to water and access to marinas and good locations, there is nothing that’s going to slow down the Boat Club.”

CC: “I think the first point to make is we did not acquire Freedom Boat Club in order to enhance our boat and engine sales. There will be a nice benefit that gets unlocked over time associated with that, but our primary objective here is to tap into a completely new consumer segment. We know that a very, very large portion – call it 99% plus – of folks that are joining boat clubs have no intention of buying a boat at the time that they join the club. We see this as an opportunity to tap into a whole bunch of consumers that are looking to experience boating in a way other than ownership. As it relates specifically to fleet adoption, we’ll be looking to John and the entire team to figure out what makes sense and what a thoughtful approach there would be. We don’t come in with any preconceived notions and we understand over time and over the  years, our job is to create value for the franchisees, and if there’s opportunities for them to adopt our  product and they see value in that, than we will obviously entertain that. But that’s not our primary objective here.”

BP: “And if I could just add, this partnership is really rooted in our foresight in the market and a focus on the consumer and where we believe the consumer is going. And as you think about the trends from a sharing economy, certainly engaging more millennials, this is going to be one of the models that we think is going to be a mainstay in the future of marine. That was the starting point for this partnership and our interest in this space. I think it is natural that we bring some synergies to the table but those really have to be very thoughtful in how we engage and move forward. There is a large group of franchisees and partners we want to hear from. We’re also excited how the insights that we’re going to gain from the Freedom organisation can help our core business from a product development standpoint also.”

Are you suggesting the clubs can serve as a testing ground?

BP:  “I think it could be. And when you look at John and his team’s ability to engage a new consumer and how that begins to inform boat design and our ability to access new market, you can see a lot of opportunity there.”

JG: “We’ve done that a lot in the past with other engine and boat manufacturers because there’s no better testing ground than the day-to-day, some might say ‘abuse’ but I’ll say ‘day-to-day USE’ of our membership on the boats. We know pretty quickly if there’s something wrong with the boats.”

Will you take or more national marketing approach or will it remain largely market by market?

JG: “That’s something we’ve been working on for really the last 12 months; a national marketing and branding campaign for the club. We have always taken the tact internally that our franchisees are better tailored to spend their money in their market but as we now hope to leverage the Brunswick brand and the resources that they have, I think that is top of the list here.

BP: “The team here [FBC] has really done a nice job understanding how to connect with the specific consumer and what Brunswick brings to the table is a lot of capability as you think about data and analytics, some of the customer insights, and so it will be a really nice synergistic partnership. The insight from Freedom in local knowledge and expertise couple with our capability to really be strategic and make some smart investments nationally and locally.

CC: “And just to add to that, my hypothesis is one of the inhibitors to growth in the boat club segment right now is awareness; that the opportunity exists. I believe that today’s news and all of the resources that we will put behind it in partnership with John is not only going to benefit Freedom Boat Club, but it’s going to benefit a lot of the other players that are in this space – looking to attract new boaters to the water – and that’s very exciting. Because while Brunswick and Freedom Boat Club intend to lead the industry in helping attract the next generation of boaters, we certainly recognise that’s not something we want to do on our own, so we are very supportive of other folks who are after that ambition as well.”

Have you established specific growth goals or a timeline?

CC: “There aren’t any specific key performance indicators, but I would say broadly is that John and his team have built tremendous inertia and momentum over the past three to five years and part of my job is to make sure none of that is inhibited moving forward. I would suggest this will likely create a new wave of interest from operators that want to become a franchisee and open  markets and will continue to tackle those as they come.

JG: “It’s always been our goal, even with this acquisition, we want to grow as quickly as we can but still maintain the support level for our franchisees. Growth is extremely important, but we want to do it right and we’re going to continue that philosophy.

Where does the international component fall in the priority list?

JG: “We have a great relationship with Jeanneau throughout Europe; we do have a couple of franchise owners  that are Jeanneau dealers and  I know the relationship that Brunswick has with Mercury is extremely important to them  and I think the intent is we are going to continue with the relationships that we have and hopefully leverage some new ones and not only support the  franchisees we currently have but to grow there the same way we’re doing it now.

CC: “There’s a lot of opportunity  that remains in open markets in the United States, there’s a lot of opportunity in Canada, there are emerging opportunities in Europe, and even other continents that John is starting to explore as well, so it doesn’t have to be an either-or, it can be an end, if you will. John will be exploring all of those avenues and trying to do it in a thoughtful manner where Freedom grows at a responsible pace.