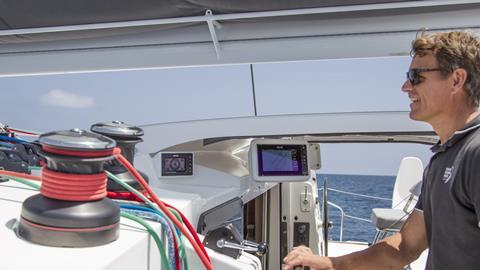 Navico’s new CEO Knut Frostad shares his views on the shape of the industry to come, from auto docking and increasing levels of automation to why we should be looking to the smart home market, rather than the automotive sector, for inspiration.  He says a movement to take the company back to its basics holds the key to future market dominance.

The appointment of Knut Frostad as president and CEO of Egersund, Norway-based Navico last June raised more than a few eyebrows across the recreational boating industry. While absolutely no one questioned the former Olympian and four-time Volvo Ocean Race finisher’s qualifications to lead the world largest marine electronics conglomerate, many were curious how the respected Norwegian yachtsman would put his own touch on the company following a 10 year span where outgoing CEO Leif Ottosson doubled revenues and implemented substantial improvements to the company’s supply chain and R&D initiatives.

Frostad, a 14-year Navico board member, brings impressive credentials to the corner office. Beyond his considerable experience as an internationally-competitive sailor, his CV notes significant business management experience, as well as an impressive slate of director and advisor positions with a number of international companies. IBI spoke with Frostad about what lies ahead as Navico enters its new era.

For the last couple of years we’ve heard a lot about increased levels of automation in boating, with self-docking software and such. What are your thoughts on all of this?

Knut Frostad: I think I probably have a slightly different philosophy on this. I certainly agree the whole industry is heading towards greater levels of  integration and smartness and connectivity. But we need to be careful that we don’t run in front of the market too much.

“The reality is that in spite of all of the talk, truly autonomous auto-docking, where you just push a button and the boat takes over, is still very, very far away.”

Integration in the form of digital switching and connected devices is all fairly simple. The greater challenge is the logic you need to add to that in order to enable true automation. I worked for Volvo cars for several years, and I know how long they’ve worked toward developing truly autonomous driving and self-parking vehicles. Yet even so, today the auto industry still struggles to self-park a car on an uneven surface. Now imagine how much greater the challenge is to try and automate the docking of a boat, where you have a still more uneven surface, you have wind, you have waves, you have currents, you have unpredictable, erratic wakes from passing boats, you’re dealing with boats of different drafts and engine power, and all these infinite variables. The reality is that in spite of all of the talk, truly autonomous auto-docking, where you just push a button and the boat takes over, is still very, very far away. I mean, it is an exciting prospect. But we have a long way to go yet.

In view of all those variables you described, how much automotive technology can really be applied to developing an auto-docking system?

Honestly, not very much. In my previous role as a Navico board member we had a steady stream of consultants come and try to sell us our future strategy. And, most of them took a starting point in the automobile industry. That in itself is a problem, because the boating industry is very different from the car business. It’s completely different. For starters, car manufacturers are huge, and they enjoy an economy of scale that boat builders just don’t have.

If you really think about it, the boating industry is actually much closer to the smart house market, at least in terms of scale. We have been talking about connected and smart houses for 20 years, where everything is supposed to be connected and your phone controls everything. But no one has managed to establish an industry-wide standard. One company does the music, and someone else does the air conditioner, and someone else again does the switching, and some of these systems talk together while others don’t. They’re all trying to implement their own proprietary standards but none of the home builders do the kinds of volumes to allow that. Just like the boat industry, you have a large number of different builders all producing modest volumes, and so it becomes difficult to achieve critical mass.

Even if it were possible to attain that critical mass, are boaters themselves ready for that level of automation? Do they even want it?

I’m not convinced they do. Boating is still a very passionate, emotional thing. The best two months of the year are when you have the boat. It’s all about passion. Imagine if we take the steering wheel away from someone who buys a power boat. The whole reason you buy it is to steer the boat. That’s the value, the feeling that you are the captain, you have the freedom, and you have the control in your hands.

We know that we are about to take the steering wheels off the cars. The cars are just becoming transport and our kids, as they grow up they couldn’t care less about what car brand they’re buying. They probably not going to even buy a car, they’re just going to have a shared ownership arrangement or use Uber or something else. They just don’t care. But boats are not like that. We are still selling boats because people value the emotional connection that comes with being on the water.

That’s not to say that advanced technology has no place in boating because it does – on many, many levels. But we have to think about how we enrich the boater’s experience without getting in the way of it.

‘Enrich the boater’s experience without getting in the way of it’ is an interesting approach. How do you accomplish that?

I used to work in mobile apps and you can do a lot of things with a phone and a boat today. We can obviously connect it to our devices, and we can use the phone to pretty much remote control the entire system. We can switch things on and off. But I think the more interesting opportunity with the phone is to use it as a way to connect with boaters even when they’re not using the boat, and use it as an educational resource. For example, a boater walks into a store and buys a chartplotter and immediately think how on earth am I going to install it? We provide a printed manual. But the phone is a much better device to walk the customer through that installation. We can show them videos, we can show them images of the tools they need.

“Cars are just becoming transport and our kids, as they grow up they couldn’t care less about what car brand they’re buying. They probably not going to even buy a car, they’re just going to have a shared ownership arrangement or use Uber or something else… But boats are not like that. We are still selling boats because people value the emotional connection that comes with being on the water”

So, we’ve started doing that. We have a product we just launched in the US last fall that tracks the boat. It’s a very simple device, but what’s more interesting is how we handled the installation. We had a target that the installation should never take more than 15 minutes, which was as quick as we could do it with the pros. Then, we went through the installation process with test groups to see how we could shorten the time from when they bought the product which they had never seen before, and install it in the boat. We did it again and again and again and again. We managed to get consumers to do it in 15 minutes, giving them the confidence to make the job really quite easy. Our customer interviews revealed that many people struggle with installing marine electronics, and that difficulty represents a barrier to them buying more. Using technology to address that can only help boost our aftermarket sales.

Apart from facilitation installation, that also seems like a great way to replace the traditional operating manual.

Absolutely. One interesting statistic that our customer research found is that a lot of people are only using about 30% of the capabilities that their chartplotter or fishfinder or MFD have. Again, the phone is the best device to teach them how to operate it and take advantage of capabilities they may have not even knew they had – again, enriching their experience. We can put a QR code on the box so purchasers can just scan it and then we know they have bought this product and we can provide content for that product, maybe with a message that says thank you, we see you live in the UK, here’s a new map for your plotter. It’s so much better than getting a lot of books and manuals about stuff that they don’t really care about.

That seems like a significant initiative to undertake on an enterprise basis in view of how many products Navico makes, and particularly with so many electronic components having a comparatively short product lifespan. 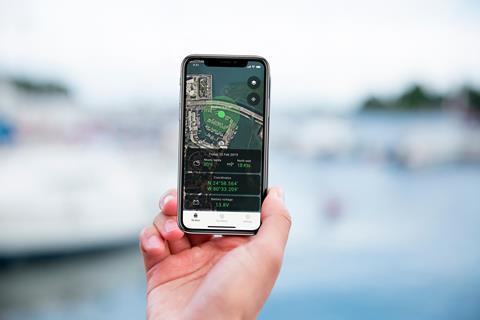 Well, it is, but we’re going to do it for each of the brands. We’re starting with Lowrance now, where the app also will have a relationship with the electric trolling motor. Then later in the year we will roll it out for all the brands.

”What is going to change is that we will be able to launch updates super-frequently. Like you have on your phone today, basically. People know how cumbersome it is today to upgrade the software on their marine electronics, it’s a pain in the ass.”

This is a major investment for Navico, and the biggest part is to move to the new software platform of Android. We’ve been going on that now for two or three years already. That’s an investment of … let’s call it double digits above millions … that we are making in our software future, and we are doing that on top of our normal product development. So, if we took it away, you wouldn’t feel a difference today, but you will feel the difference in 12 to 18 months from now.

What is going to change is that we will be able to launch updates super-frequently. Like you have on your phone today, basically. People know how cumbersome it is today to upgrade the software on their marine electronics, it’s a pain in the ass. But in the future you will hardly feel it, it will be like an app update on your phone and that’s it. We will build much more of that specialist software for the consumer as we interact with them, we will see what they need and have the ability to provide that easily.

We are going a little bit more back to basics at Navico. We are not simplifying everything we’re doing, but we’re trying to learn more about how people are using our products, then dreaming up new things for them add to the products that will enrich their own unique, personal experience. Long story short, we are sort of going a little bit back to our core and doing that better, not radically changing the products, but just making them a lot better.