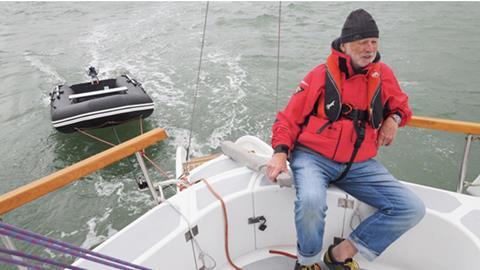 It is with great sadness we report the loss of former Yachting Monthly editor Paul Gelder, a highly respected journalist, editor, sailor and friend to IBI and countless others. The following obituary appears in Yachting Monthly:

He had been suffering from cancer.

Paul first joined Yachting Monthly as features editor in 1990, a position that he held until his promotion to editor.

He had previously been editor of the West Sussex Gazette and had developed his career as a journalist working on regional papers.

On Yachting Monthly he quickly showed both his sense of adventure and his ability as a gifted writer by persuading Sir Robin Knox-Johnston to take him on as a crew member delivering Suhaili back from the Azores, where she had spent the winter after Sir Robin left her there having been rolled and dismasted on a singlehanded passage back from the USA the previous year.

Re-masted and with a crew of four, they had a memorable passage back to the UK, about which Paul wrote one of his first major features for the magazine.

Andrew Bray, who was editor at the time, commented that the story, called The Sea God and the Scribe, was one of the best sailing stories he’d published.

Paul’s writing career continued in much the same vein. As well as reading and editing the many stories submitted by readers, he continued contributing his own writing to the magazine and having his own adventures; on one Caribbean trip he was bitten by a rabid dog and had to undergo a painful series of injections (it turned out the dog was not rabid); he also sailed in the first BT Global Challenge on board Interspray in 1992, completing the first leg from Portsmouth to Buenos Aires.

He later wrote a book on Interspray’s Challenge. He also wrote a book about the BOC Challenge, The Loneliest Race, in which his friend Harry Mitchell was lost at sea.

In 1991 Paul was nominated for – and won – the Newcomer of the Year Award in the IPC Magazines Annual Editorial Award.

At the Awards ceremony the audience, expecting a fresh-faced, young, junior journalist were taken aback at this bearded and greying 54-year-old as he strode up to accept his award. This was one that was very well-deserved – Paul became editor in 2002 and rapidly put his mark on the magazine.

He initiated a programme for the magazine called the Crash Test series. This was fully in the magazine’s ethos of practical seamanship, instituted by one of his illustrious forebears, Des Sleightholme.

An insurance company contributed a 40 foot yacht which, in their exercises, was variously dismasted, sunk, capsized, set alight and all manner of potential disasters .

The resulting, instructive copy was unique and highly regarded.

Gipsy Moth IV was the yacht in which Sir Francis Chichester sailed solo round the world, stopping only in Australia, and finished in 1987.

For this he was knighted and Gipsy Moth was lifted out and berthed alongside Cutty Sark in Greenwich.

In 2003, Paul, along with many other sailors, were horrified that such a famous yacht was slowly rotting away and a campaign was started, initiated by Paul, to have her lifted out and restored to seagoing condition.

The boat was bought for “£1 and a gin and tonic” by the UKSA which then oversaw the restoration carried out by her original builders, Camper & Nicholsons.

She set out on her second circumnavigation in 2005, the voyage scheduled to coincide with the magazine’s centenary in 2006.

As well as editing and sailing with Yachting Monthly, Paul spent some time re-building and renovating his much modified Telstar trimaran, Phoenix, so called because she’d been damaged in the 1987 storms and re-built by his friend David Kay, and then sailing her around Chichester Harbour and the Solent, where they were a familiar sight.

He leaves his wife Anne and daughter Laura.