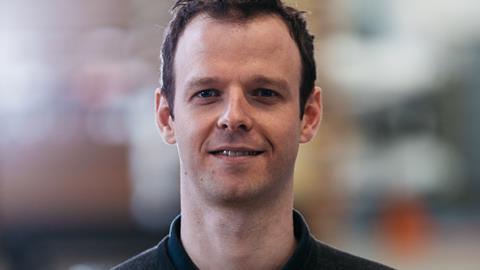 Williams Jet Tenders’ Design Engineering manager, Dan Bloice Smith, was named the inaugural winner of the Rising Star award at last year’s Boat Builder Awards in association with Raymarine. He talks to IBI about his involvement in Williams’ new EvoJet project and how the industry can attract young talent

In June UK builder Williams Jet Tenders announced the launch of a new product range of semi-custom tenders and chase boats aimed at the superyacht market. The first model in the range, the Evojet 70, will launch in autumn 2019 and will be a tender capable of carrying 13 guests. A larger sister model will launch later in 2020.

Williams’ Design Engineering manager Dan Bloice Smith was named the inaugural winner of the Rising Star award, sponsored by Gurit, in the 2018 Boat Builder Awards held in association with Raymarine. Smith has been involved in launching 16 new models for Williams Jet Tenders in eight years. He talks to IBI about the unique challenges presented by the EvoJet project.

Is there someone at your company who stands out as an emerging leader? Why not nominate them for the 2019 Boatbuilders Awards for Business Achievement?

How involved were you with the development of the new EvoJet?

It’s a top-level decision to understand where the next window of opportunity is to keep growing the business – once the decision was made it was over to me and the design team to put flesh on the brief. The concept was born in January 2017 and we started in earnest in September 2018.

The first boat is now in build and then we’ll have extensive testing, so we’ll be looking to start production in the Autumn with boats ready for sale around Dusseldorf in January.

What was the biggest challenge?

The T-Top was new for us. It was designed to be light and strong and it hinges rearward to fold flat into the rear footwell area, so it can be stored easily onboard. The boat is designed to be treated like a dayboat as well as a superyacht tender. There are a lot of strands to the thinking – we wanted the boat to be something you wouldn’t mind spending all day on – so shading from the sun was critical. Having a structure above was also important as it provides fixings for awnings, so pretty much the whole boat can be shaded. 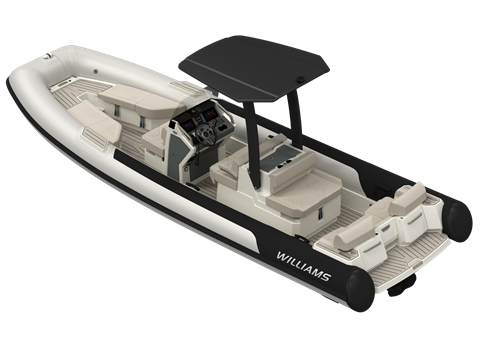 We also gave a lot of thought to how people can get on and off the boat – you can board the boat at any one of the four sides, and we developed the folding aft seat.

How does it compare to other Williams projects you’ve worked on?

The Minijet project launched in 2016 was at the other end of the spectrum - coming up with a product a 1/3 cheaper and a 1/3 lighter anything we’d built before was a fun challenge. But getting into the superyacht sector with EvoJet is a real step-change for us.

How will the new model impact the factory floor?

We wanted to offer something to the market that was still a production product, with the robust quality of Williams and extensive testing behind every feature of it. We have a dedicated team to build the boat in one location rather than running it through the rest of the production line. We developed it to be a production friendly product.

It’s undoubtedly been a step up in complexity for us – the detail that we’ve had to go into to make it production friendly – we’ve had to draw on a lot of resource. You have to have a lot of respect for people in the superyacht sector at the moment – you realise the amount of detail you have to get right to match up to the mother ship.

The desire to create something new, and in terms of the manufacturing it’s very appealing to know that if you design something well and it’s successful, it can bring employment and real benefits to a local area, rather than simply being a 9-5 job that you leave behind at the end of the day.

The marine industry is underrated from a design engineer perspective – you get the freedom and scope that you don’t get in the auto industry for example.

The challenge for the boat sector is how do we move it forward? We can be a little conservative at times. How do we excite the next generation? What does the product look like that will engage them in our industry?

The Rising Star award is designed to recognise young talent in our industry. What can/should the marine industry do to ensure it attracts the next generation of designers, engineers, marketeers, builders…?

The industry needs to attract the next generation at a ‘user’ level first, so children/young people are exposed to boating at an early age and get the bug. The barriers to entry for participating can wrongly be presumed as high for many, however there are many facets of the wider marine industry that are low cost and easily accessed, be that stand-up paddle boarding, dinghy sailing, kayaking etc. As a seafaring nation surrounded by water there should be more investment at government level to expose young people to water sports, the RYA have been doing this for years but lack funding to roll this out further. Apprenticeship programs are great, but you need passionate youngsters to fill the places.

Want to know more about the Boat Builder Awards 2019 and the other award categories? Visit www.boatbuilderawards.com