Wrecked, Abandoned or Hazardous Vessels Act provides fines of up to C$50,000 for individuals and $250,000 for businesses 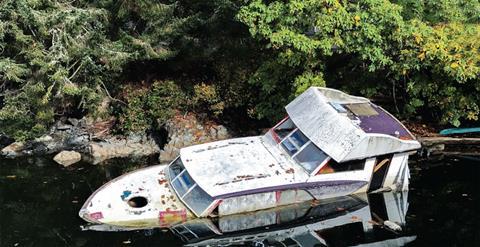 The Government of Canada is busy this week promoting the official implementation of its new Wrecked, Abandoned or Hazardous Vessels Act, which provides fines of up to C$50,000 for individuals and $250,000 for businesses which are found to be guilty of abandoning boats.

The new legislation, which became law on July 30, increases owner responsibility and liability for both commercial and recreational vessels, and enables proactive intervention when problem vessels begin to pose navigational hazards. “This significant legislation is making vessel owners responsible under the law for the safe disposal of their vessels,” said Minister of Transport, Marc Garneau. “Most boat owners are responsible, but for those few who are not, we now have the ability to hold them to account.”

The new legislation supports previously-announced programs by Transport Canada and Fisheries & Oceans Canada that have assessed and removed more than 100 derelict vessels so far, many of them located within federal small harbours. Additional measures that the act will support include initiatives to improve vessel owner identification, and establishing a polluter-pays approach for vessel cleanup through the creation of an owner-financed long-term fund. Details of that funding model were not announced, and are not expected to be confirmed until after Canada’s federal election in October.