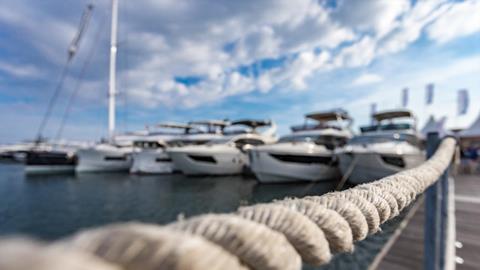 Following talks with UCINA (the Italian Marine Industry Association) – initiated during the Genoa International Boat Show last September – Italy’s Customs Agency recently clarified the procedure regarding “verbal declaration for temporary admission”. The procedure, defined by the new article 212 of EU Delegated Regulation n. 2446/2015 (DR), depends on the “conditions for the total relief from import duty to be granted to means of transport”, including recreational units.

The Customs Agency’s Centralised Legal Department has confirmed that for a “Pleasure Yacht”, which is registered in a Third Country, the request for the “verbal declaration” – as required by art. 136 of the DR to record the moment of entry into the EU customs area – is to be considered a “faculty” and not a mandatory procedure, keeping in mind that by simply crossing the EU border (in this case entering EU waters) travelling units fall under “temporary admission”.

If, however, the unit’s owner decides to present a verbal declaration anyway, in order to have the Customs Office confirm the moment of entry into EU territory – and thus the mark the beginning of the period in which they can stay, predicted to be 18 months (the period of discharge) – they can use the Annex 71-01 DR, without requesting any other guarantees, proving the existence of all necessary conditions to benefit from temporary admission (meaning the unit is registered in a Third Country and is the property of a subject based outside the European Union), after documenting the unit’s provenance from an extra-EU territory.

The latest developments were presented by UCINA and illustrated by Dr Ezio Vannucci during the MYBA CHARTER SHOW 2019, held by the International Brokers Association and attended by over 90 industry operators, including charters, brokers and masters.

UCINA has also entered into talks regarding another key change in regulation, specifically the abrogation of the so-called “internal traffic ban” contained in letter c) of article 558, par.1, of the abrogated EEC Regulation n. 2454/93 concerning Commercial Yachts and YETs (Yachts Engaged in Trade) registered in a Third Country, believing that today, as has been confirmed recently by instructions issued by Customs Authorities in France and Spain, such units can circulate on national waters including when under a hiring/charter contract when setting sail from national ports, in line with the conditions required by temporary admission, effectively negating the obligation to release units for free circulation prior to initiating a charter contract.

“The rules concerning the customs regime for temporary admission have undergone a number of changes within the context of the new EU Regulation which has integrated the instructions contained in the new Union Customs Code n. 952/2013” – explained Maurizio Balducci, UCINA Vice President and delegate for matters concerning regulations, tax and customs. “Right from the beginning we immediately entered into talks about this and other key issues with the Customs Agency. Recently we also initiated and concluded a procedure aimed at achieving AEO status (Authorised Economic Operator) as to obtain a reduction in the guarantees shipyards are expected to provide for refitting commissions of extra-EU units. This operation allows us to provide Association members with the know-how for these procedures and Customs Administration with future options for simplification to the benefit of the boating industry as a whole”.