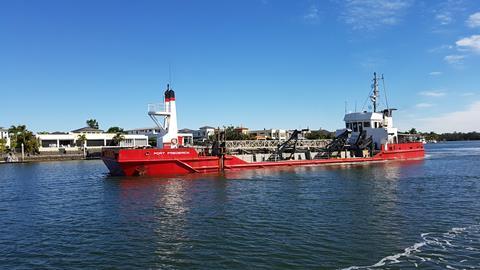 Two multimillion-dollar dredging projects underway this year in Queensland, Australia will bring significant benefits to the local marine leisure sector. In Cairns, a A$127m scheme to dredge the Trinity Inlet will start shortly, while on the Gold Coast a A$10.3m initiative to deepen the Coomera River is ongoing.

The Coomera River programme is important because it will serve the A$200m or so investment that is being put into expanding the facilities at both Gold Coast City Marina & Shipyard and The Boat Works.

The programme is being undertaken by the Gold Coast Waterways Authority (GCWA).

“The completion of our Dredged Sediment Management Facility at Coomera and the associated dredging of the Coomera River is a A$10.3m investment by the Gold Coast Waterways Authority in the marine industry’s future,” the GCWA told IBI. “It will support tourism, jobs and businesses in the Gold Coast Marine Industry Precinct by improving navigational access to the Coomera River.

GCWA CEO Hal Morris said: “Up until now, the Authority had not been able to dredge the upper Coomera River because there was no way to deal with the silt found in that part of the river in an economical and environmentally friendly way. The material being dredged is too fine and silty to use for beach nourishment or offshore disposal. The alternative would’ve been to transport it to somewhere like Brisbane, which would’ve been prohibitively expensive.”

He added: “Having a facility like this is a game changer for the Gold Coast Marine Industry Precinct, marina operators, waterways users, residents and the Gold Coast economy.”

In Cairns, the A$127m dredging programme is part of the A$177m Cairns Shipping Development project, which is all about deepening and widening the Trinity Inlet in the Cairns port area to allow larger vessels of all types – be they superyachts, cruise ships, commercial craft or naval ships – to use the port.

To undertake the dredging programme, which is due to start this month and last until mid-September, Australia’s largest backhoe dredger, the Woomera, and a Danish flag cutter suction dredger, the Balder R, are now in the northern Queensland city ready to start work on the scheme.

Under the Shipping Development Project, the dredging and new wharf building plans will be completed in 2020 and allow for ships up to 300m long to berth in the port. As for superyachts, the expansion will allow yachts of up to 80m (263ft) or more to be handled in the inlet, opening up wider possibilities for repairs and refits. Marlin Marina in Cairns has already had superyachts of this size and larger visit.

As a lead-up to this, BSE Cairns Slipways has already invested in a 1,120-tonne capacity travel lift, which is currently the largest in the world. It was soft-launched in May but will have its full official launch on August 9.