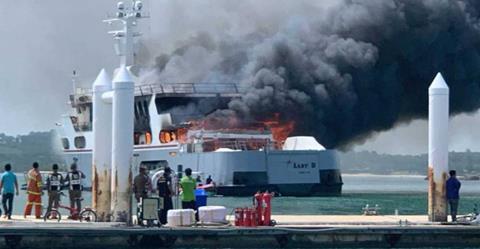 Three events over the past week or so in Phuket, Cairns and Cannes involving two superyachts and a smaller craft have resulted in a major fire, a collision, and the death of a British superyacht crew.

The fire occurred onboard the Cayman-flagged 56.39m (185ft) superyacht Lady D, which was built in 1976 by Quality Shipbuilding to a Halter Marine design. At the time of the fire, Lady D was berthed at the Ao Po Grande marina on the east coast of Phuket.

Local firefighters were called to the marina early in the morning along with assistance requested from the marine police. To prevent the risk of other yachts being affected, Lady D was towed away from the marina. It took around three hours to bring the fire under control.

Only one crew member was on board the yacht at the time of the fire, with the master and other crew members reportedly being overseas. No injuries were sustained and the owner was informed. The cause of the fire is still under investigation, according to a Phuket News report.

The newspaper quoted Thalang Police Chief, Col Thirawat Lamsuwan, saying: “The yacht has about 100,000 litres of fuel on board. It is being towed out of the marina for safety as the firefighters have not been able to bring the fire under control after three hours.”

The yacht had apparently arrived in Phuket from Langkawi in Malaysia and it had a near full load of fuel on board.

As a result of the fire, which may result in Lady D being declared a total loss, the local provincial office that deals with disaster prevention and mitigation is pursuing the relevant authorities to give the go-ahead on a requested Baht50m spend on fireboats. This is despite the procurement of such vessels having been approved by the Budget Bureau.

In Cairns earlier this week, the 45.6m (150ft) superyacht Moatize, built in 1999, crashed into a gangway on the E jetty in Marlins Marina while trying to berth due to a mechanical fault. Skipper Jason Chambers told the Cairns Post that “hard work and quick thinking from the crew kept the surprise crash from being catastrophic. The crew had been doing everything by the book when the starboard gear became stuck on a tight turn, locking them full ahead.”

In response, the engines were shut down and the Moatize was anchored in a spot where there were no people so no injuries occurred as a result of the collision. The yacht had arrived in Cairns from Brisbane where it is due to stay for a couple of weeks. The yacht is understood to have recently been purchased by the Cairn coal entrepreneur Michael O’Keeffe from Australian billionaire Frank Lowy. The collision caused limited damage to the yacht’s bow and the marina gangway.

And in Cannes, a British sailor died as a result, according to an investigation, of “a captain showing off.” Jake Feldwhere, a 29-year-old deckhand, was retrieving the anchor on the boat he was on when an out of control yacht crashed into it, reportedly travelling at three times the speed limit.

Feldwhere is understood to have been in France for about a month and recently completed a superyacht training course. The skipper of the out-of-control boat has been charged with involuntary manslaughter and forbidden from working as a boat captain. The UK Marine Accident Investigation Branch is to undertake an investigation.