The first fast charger for electric boats is to be installed in a marina in Norway. This will be the first installation in Northern Europe of its type and it is planned to expand these installations into a network throughout the region.

This first unit will be installed at Florø’s marina in Norway making it the first to be equipped with the World’s-first Supercharger for boats which will allow electric boats to be charged at over 150kW. Expansion of the installation of these superchargers will follow with the marinas at Aker Brygge, and Bergen to be equipped with chargers for electric boats during the coming months using a BKK developed charging unit. 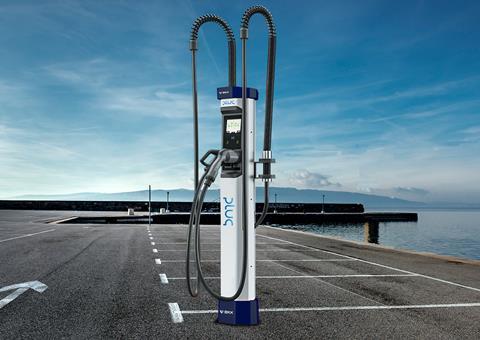 The fast charger network will be the first of its kind in Northern Europe and one of the few in the world.

BKK’s CEO Jannicke Hilland commented, “Norway has led the way in the electric car revolution. Now the country is also focusing on the nautical industry, making it easier for the users to switch to an electric boat”. BKK is one of Norway’s largest power and renewable energy groups and has ambitions to become the largest electrification facilitator in Norway.

“We have worked with the plans over time. Even if it might take time before it becomes a mass market, the transition is around the corner and the charging infrastructure must be safe and accessible to all. Both boat owners, marinas, boat dealers, and politicians have raised concerns about how charging infrastructures could be installed and how to make them safe. We are now reducing that uncertainty”.

“This is wonderful news for the electric boating industry” commented Leif A Stavøstrand, Co-founder & CEO of Evoy which offers electric motors and outboards for boats. “This is a dream come true for Evoy, seeing that the infrastructure starts to pick up, making e-Boating a viable option to more users. The infrastructure and electrification of ports are essential to develop a stable market and meet the present demand of electric boat owners. Also, one of the obstacles was the charging capacity, often too slow. With 150kW, this is no longer a concern.”

The electric boat chargers will be part of the BKK company Plug, which already builds, owns, and operates onshore power plants for ships. The fast charger network will be the first of its kind in Northern Europe and one of the few in the world. “There are a few plans for single chargers in Norway. In Europe, there are a couple of private initiatives” said the general manager of Plug, Maria Bos.

“The first five charging points are only the first part of the investment. Plug intends to work with both the Oslo Fjord and Western Norway. We have several plans and good dialogue with multiple ports and boating associations. We would also very much like to hear from the ports and the boat owners looking for a charging station, being ready for the transition” said Bos.

When the electric cars arrived, there were different charging plugs for different cars. Now it is standardized. BKK and Evoy believes the same must happen for boats to answer the most demand possible. Plug owner BKK is among Norway’s largest in charging for electric cars with over 400 fast chargers in over 150 locations throughout Norway.

Plug was founded in 2018 and is based in Bergen, Norway. The company develops, builds, and operates shore power and charging infrastructure for all types of boats and ships. From the smaller leisure boats to the biggest cruise ships. They work with both national and international ports and collaborate with leading suppliers to get the best technology.