Volvo Penta has developed a prototype of a new electric driver interface with new boating behaviours in mind, as it looks to define what the next generation of boating could look like. For instance, one big difference, says Volvo, is that instead of measuring fuel consumption boaters need to know about battery range and charging capabilities.

“The electric driver interface was first revealed onboard the catamaran with our electric saildrive concept in Cannes, where we received initial, high-level input from media and customers,” explained Anna Lindgren, Director Marine Product Planning at Volvo Penta. “The prototype is being designed for use across our marine electromobility platform, but testing it onboard the catamaran has provided a great chance for us to capture learnings and feedback easily. We need a lot of customer input at an early stage in order to find how to best design this interface.” 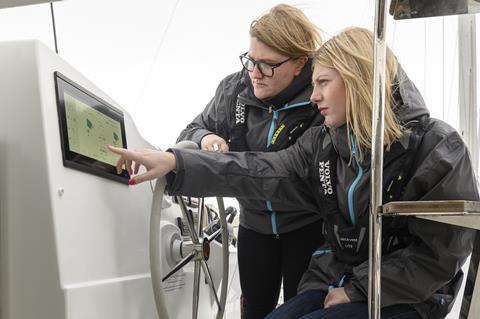 More than 100 customers have helped shape the look, feel and functionality of the new system

Volvo Penta received feedback from more than 100 stakeholders – who tested the entire electric saildrive concept at Cannes – and from this it became clear that the driver interface was even more important for electric driving than it was for traditional engine driving.

Working with the customers to learn more

A group of OEMs, captains, partners, and dealers gathered at La Rochelle, France to participate in a hands-on workshop onboard the electric catamaran. The team worked closely with Volvo Penta’s UX team to try and test the prototype user interface in a real-life context.

“We invited these customers – who had previously driven or been part of the development work with the electric catamaran– to hear their expectations and see their behaviors when driving this boat using the new electric interface,” explains Tobias Ångman, UX designer, Volvo Penta. “Electric drivelines are very different from combustion engines; they don’t behave in the same way when it’s put into gear – you don’t have the sound or the vibrations – so other sources of information become important to the driver. This silent experience is very different, and we wanted to learn firsthand how users expect the interface to guide them at a glance when driving.”

The electric driver interface will support the driver in making accurate decisions during the usage of the boat. This will include functionality to monitor maneuvering of the boat as well as monitoring of the energy balance for the battery. All energy consumers connected to the battery as well as all energy contributors need to be considered to assist the user in making decisions on routes and boat usage.

The hands-on testing enabled the Volvo Penta team to better understand what features are crucial to the electric onboard experience.

“This is a new way of working for Volvo Penta, but we need to learn, get feedback and quickly make adjustments to the technology,” says Lindgren. “It’s a two-way process, we learn from our customers and partners, and they learn from us. We’re working to develop an integrated system and the input we have now collected will influence our future development.”