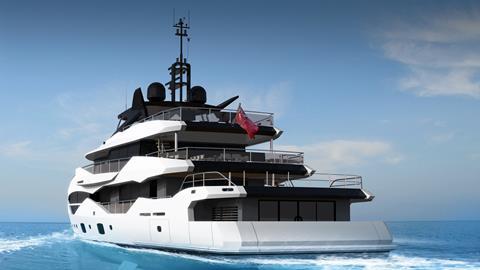 When details were first released on Sunseeker’s new 161 Yacht in partnership with ICON, the UK builder confirmed that it will use a proven fast displacement hull design which, considering the relatively modest power fitted, would be capable of speeds in excess of 22 knots.

Triggered by a desire to develop hull forms which are efficient over the entire speed range and not only at a chosen speed, the specialists at VONA pioneered the hybrid hull form. The FDHF increases the overall performance of the yacht by generating less wake, thereby ensuring a longer cruising range with lower fuel consumption and emissions.

According to VONA, the main benefit of this hull form is the ‘performance’, in all its connotations. Performing better than conventional displacement and semi-displacement type hull forms says VOMA, the FDHF concept improves the efficiency of the vessel by around 15 to 20 per cent it claims, resulting in a substantial impact on the yacht operating costs while also lowering its environmental impact in terms of engine emissions. Part of this success comes from the use of smaller engines than would typically be specified for a 50m project, made possible by the slenderness and special form of the hull resulting in a very low wave profile over the entire speed range. Other performance benefits are improved manoeuvrability, comfort and seakeeping aided by significant roll reduction. 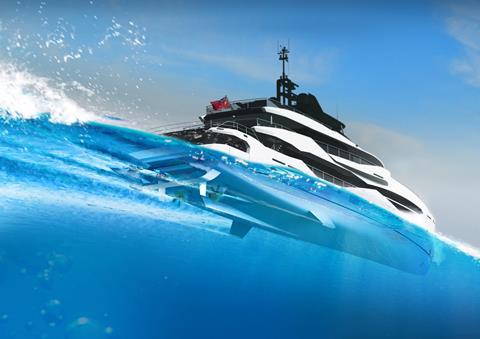 The VONA FDHF, currently ranked as the most efficient in the Wolfson Unit’s database

The Wolfson Unit based in the UK has carried out towing tank tests on nearly 1,200 hull forms since 1968. Its database contains the resistance and powering data for the majority of tested motor yacht hull forms.

It can calculate a performance coefficient for each resistance relating to the speed, length, displacement and effective power. This allows direct comparison of the FDHF with other tested hull forms.

Dickon Buckland from the Wolfson Unit recently said about the VONA Fast Displacement Hull; “When compared to other round bilge hull forms at speeds between the cruising speed of 15 knots and those approaching planing of 44 knots, the tested motor yacht’s ranking is typically around 100 – 140 per cent. This means that the design is currently ranked as the most efficient in the Wolfson Unit’s database.”

The option of including the award-winning Hull Vane technology improves the picture still further; Positioned below the stern of the yacht, the patented fixed foil fuel-saving device influences the stern wave pattern, creating a forward-orientated lifting force which lowers the pitch motion and running trim.

The performance of the Hull Vane is linked to four distinct effects. Firstly, the wing develops a forward thrust force out of the upward flow under the aft of the yacht. Secondly, the Hull Vane has an upper surface on which a low-pressure region is created. This low pressure reduces the stern wave produced by the vessel and therefore the yacht has less wave-making resistance. The third effect resides in the vertical component of the lift, it lifts the stern and keeps the bow down at high speed aiding stability. The final effect is again unique for the Hull Vane - as it has an overall large surface, it dampens the pitching motion, reducing the added resistance and thereby improving seakeeping. The combined effect, when fitted to the fast displacement hull, reduces fuel consumption by up to 30 per cent in total, the manufacturer claims.

Commenting on the technology, Sunseeker’s CEO, Andrea Frabetti said: “From our very first project brief and the research that followed, it was very apparent that the highest levels of comfort on board needed to be a top priority, without sacrificing performance. The combination of the Fast Displacement Hull Form harmonised with the technology of the innovative Hull Vane® and fin stabilisation will offer owners incredibly smooth passage-making matched to reduced running costs – a truly remarkable result.

“The 161 Yacht will be a true game-changer for yachts in the 50m sector. With its class-beating efficiency, stability and comfort, she will deliver a significant performance advantage in open water that has been unachievable to date.”

Jen Wartena, CEO of ICON Yachts, added: “At ICON, we are immensely proud to invest in ground-breaking research and development to incorporate greener technologies wherever possible. Innovation has a vital part to play in driving efficiency, thereby delivering very real environmental benefits. Clients in the market for a 50m yacht offering incredible performance and comfort on the one hand combined with improved sustainability and running costs, can have that today with the Sunseeker 161 Yacht, no compromises necessary. It really is the dawn of a new era.”

The first hull in the Sunseeker 161 Yacht series is scheduled to launch in late 2021.