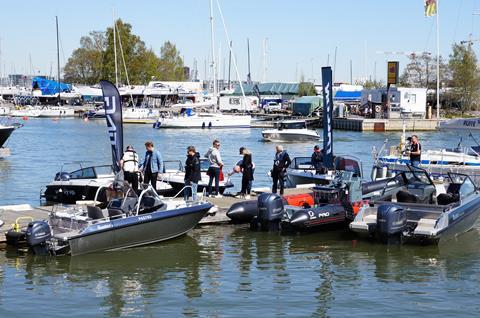 A group of boating industry players in Finland recent held a large-scale ‘boat test’ event for the first time, bringing together a wide range of boat models and related services, along with current or prospective boaters eager to take the helm.

The two-day event, held from May 16-17 in Lauttasaari, proved a success. There were 43 different boats available for use, more than 500 test runs were carried out, and almost 1,200 people participated.

“People attended the event for various reasons,” says Janne Mäkelä, sales and development manager for Bella-Veneet Oy. “There were those looking to buy a boat, as well as prospective new boaters seeking assurance as to whether boating truly is something for them.”

Mäkelä says the event clearly had a commercial impact as well. Already during the first days following the event, boat dealers around Finland reportedly received new customers fresh off a test run.

“The boat test run event does hold potential,” says Mikael Winqvist, managing director of AMT-Veneet Oy. “Although the popularity of public events appears to be continually dwindling, there were boating enthusiasts lined up at the test run event for the entire duration of two days.”

According to Winqvist, about half of those who went out for a test run were very specific about the details and the helm experience they were after in regard to the model in question. The rest just wanted to get familiar with boating and enjoy nature in the archipelago off Helsinki.

“This was also the idea: to promote boating and get new people fired up about it,” Winqvist states.

Antti Saarisalo of Ajola Yachts, who skippered a Beneteau Oceanis 38.1 sailing yacht at the event, said the manufacturer’s large performance cruiser was continuously manned over the two days. “The weather was very close to perfect, and all those who went sailing were very happy with the experience,” he says. “As a sailor, I obviously would have preferred stronger winds, but there was just one leg with so little wind that we needed to run the engine. We had multiple crews going out with us that are planning to buy a sailing boat.”

The biggest annual events for boating enthusiasts and professionals in Finland are the Helsinki Boat-Afloat Show in August and the Helsinki International Boat Show in February. However, the test run event, featuring boats available for trial runs from 23 different boatbuilders, constituted an opportunity unlike anything ever seen before on Finnish shores.

“It proved to be the right kind of event taking place at an opportune time,” says Jarkko Pajusalo, managing director of Finnish Marine Industries Federation Finnboat, the industry’s umbrella organisation in the country. ”The turn-out included both active boaters as well as those who are interested in boating or have designs about taking it up. This is just as well, since where else can you do test runs on a boat selection as representative as this one in such a short time?”

The event arrangements were carried out by Finnboat and the Finnish Marine Retailers’ Association, along with varying contributions from the Finnish Sailing and Boating Federation (the central organisation for boating enthusiasts), Helsinki International Boat Show, Mercury Marine, Keep the Archipelago Tidy Association, the boating gear dealers Maritim and Vetus and more than 20 Finnish boatbuilders, dealers and importers.

Moreover, the marine companies based on Veneentekijäntie in Lauttasaari also played an important part by arranging their traditional joint boating season kick-off event concurrently with the test run event. Veneentekijäntie in Lauttasaari is home to Finland’s largest concentration of boating industry players, featuring a wide range of related services from a repair dock to boat gear shops.