ICOMIA/IFBSO Conference 2019 highlights – Changes of guard, a war on plastics and My Way

The annual IFBSO/ICOMIA conference, hosted last week by the Croatian Boat Industry Association (CBIA) in Split, saw key appointments across both associations, along with a packed three days of networking and committee meetings, with how to reduce boating’s impact on the environment an underlying theme. It also proved the perfect opportunity to recognise a number of industry grandees.

Jennifer Thompson, senior vice president of NMMA shows, was named the new president of IFBSO (International Federation of Boat Show Organisers) after Goetz-Ulf Jungmichael, former director of the Dusseldorf Boat Show, chairing his last committee meeting, stepped down from the post after six years. For its part ICOMIA (International Council of Marine Industry Associations) recognised outgoing NMMA president Thom Dammrich who retires from the ICOMIA’s executive committee, and Jouko Huju, former CEO of the Finnish association, Finnboat, who announced his retirement from the executive committee last year. Both were given honorary memberships. Sebastian Nietupski of Polish association POLBOAT, now joins the executive committee. 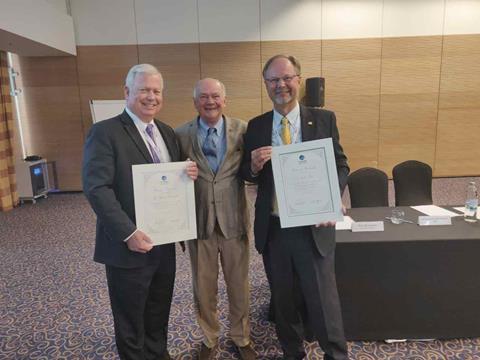 Past ICOMIA Presidents Thom Dammrich (left) and Jouko Huju (right) on receiving their honorary memberships of the association at the recent congress in Split with Paul Boomsma, ICOMIA’S former treasurer for over forty years, who was awarded honorary membership on his retirement in 2016

Wins for the three-day event included the ’speed networking’ on day two, that saw both associations coming together for the first time, exchanging ideas and contacts in eight-minute windows. The conference provides a critical coming together of industry players allowing them to share best practice ideas and to create target groups to help confront some of the major challenges facing the global marine industry today. Perhaps not surprisingly, the environment was front and centre, and it was plastics that were in the crosshairs in the IFBSO’s afternoon workshop session on the third and final day, while day two saw a meeting of the ICOMIA Environment Committee delve into the complex and pressing issue of End of Life Boats.

There’s an active effort to ensure that such sessions don’t become talking shops and preaching to the converted - action points were derived from all the workshops IBI attended. The IFBSO set up a working group to develop a simple, targeted, message to raise awareness about plastic, that should be presented in a dedicated space at shows to drive home a consistent message to consumers. The viability of a ‘Plastic Free’ show is also being explored. Similary ICOMIA’s Environment Committee has set out to determine the scale of the End of Life Boat problem, and has tasked working groups with tracking the various waste pathways that are available, drawing on learnings from sectors such as the aviation and wind turbine industries, to create what Committee chair Darren Vaux of the Australian Boating Industry Association (BIA) described as an ‘End of life Boat pipeline’.

A sailboat trip to visit the SCT Marina & Yacht Service Center Trogir, prior to a dinner hosted by the CBIA in the heart of the Croatian countryside, provided a change of scene and networking atmosphere, but it was the gala dinner, overlooking the Adriatic, on the final evening, when the personal aspect of the boating industry came to the fore. In a number of emotional industry signoffs, Goetz-Ulf Jungmichael hand over the presidential baton to Jennifer Thompson and IBI’s executive chairman Nick Hopkinson was brought to the stage by Thom Dammrich who shared with dinner guests some highlights of Nick’s 50-plus years at the helm of IBI. In the end, however, the night belonged to Thom Dammrich. Dammrich retires from his role as president of the NMMA in September, a post he has held for the past 20 years. At the behest of compere for the evening, ICOMIA executive committee member, Peter Methven OBE, Dammrich took the stage and delivered a commendable, impromptu rendition of My Way, accompanied by the resident band. As the applause died down, all that remained was for the CBIA to hand ceremonial crystal ‘obelisk’ to the co-hosts of next year’s ICOMIA/IFBSO Conference – the CBITA (China Boat Industry and Trade Association) and CCYIA (China Cruise and Yacht Industry Association).

Roll on the ICOMIA/IFBSO Conference 2020 in Zhuhai!