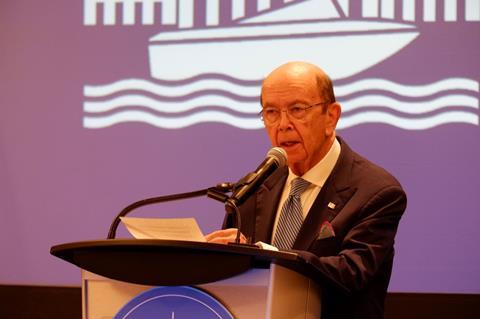 US Secretary of Commerce Wilbur Ross

Two members of President Donald Trump’s Cabinet told the boating industry Wednesday that the administration is aware of the importance boating is to the US economy and vow to continue to work with industry on everything from deregulation and expanding trade to boating access and programs to get kids outdoors and on the water.

Without ever mentioning tariffs, Secretary of Commerce Wilbur Ross vowed for “free, fair and reciprocal trade” and touted the administration’s recent trade agreements with Korea, Mexico and Canada, which have yet to be ratified by Congress.

Ross also echoed the President’s aggressive position on China. “We want China to discontinue its policies of forced technology transfer, the reverse engineering of products, and the production and proliferation of counterfeits and dangerous fakes,” he said.

Speaking at the American Boating Congress in Washington, DC, Ross drew applause when he told the more than 350 in attendance: “There’s nothing cheap about owning a boat, but it’s well worth the cost,” and went on to say how “important boating is to our nation.”

“Not only in jobs and output, but maybe more importantly in our psychological well-being. We want many more Americans to enjoy our most abundant resource: our lakes, our oceans and our waterways.

“We have signed a memorandum of understanding with four private groups [including the National Marine Manufacturers Association] to promote sustainable boating and fishing activities. We’re also working on collaborative programs with recreational fishermen to restore fishing habitat.”

The Commerce chief added: “We’re focused on creating an ever-stronger partnership with NMMA as we work to promote a healthy marine environment and new market opportunities,” Ross said. “Our goal is for everyone in our community to get to enjoy the great outdoors as much as we do. We want them to step on a boat and into the wild.”

Andrew Wheeler likened being named Environmental Protection Agency (EPA) Administrator to buying a boat: “I suddenly have way more friends than I ever thought I had.”

He said that President Trump tasked him with three assignments: keeping the air and water clean and providing regulatory relief that will create more jobs and keep the economy going.

Wheeler, who spent time at EPA in the George W Bush administration, said the agency has already taken 39 deregulatory actions saving US$39bn with another 40 in process that will save US$100m.

“Deregulation does not always mean rule rollback,” Wheeler said. “More often than not it means modernising or simplifying or streamlining regulations and that is what creates greater certainty for the American public.

“Greater certainty allows Americans to do what they do best, innovate, create and produce cleaner and safer technologies.”