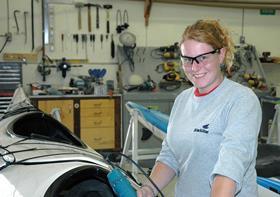 A Canadian marine trade association has awarded scholarships to three students studying to become marine service technicians. Boating BC, representing the recreational boating industry in the Pacific coast province of British Columbia, announced the recipients of its 2019 Glenn Spartz Scholarships this week.

Created in response to a growing demand for skilled marine technicians in the province, the scholarship program – named in honour of a former Boating BC board member who was instrumental in creating it – directly supports individuals working towards achieving certification as marine service technicians with an award of $2,000 towards their continuing education in the Marine Mechanical Technician program taught at the BC Institute of Technology.

“Our industry has experienced significant growth in recent years and, as a result, faces a shortage of qualified marine mechanical technicians,” says Boating BC president Don Prittie. “The Glenn Spartz Scholarship is one means of assisting individuals who are pursuing a career in the boating industry.”

The Glenn Spartz Scholarship is a collaborative initiative led by Boating BC with contributing partners from the marine propulsion sector including Mercury Marine, Volvo Penta, Yamaha, BRP/Evinrude and Suzuki Marine.