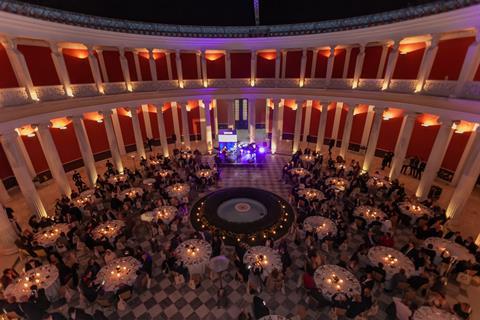 WMC welcome dinner at the Zapeion in Athens

The second day of presentations at ICOMIA’s World Marinas Conference (WMC) included a wide range of topics linked to marina operations and development.

The opening session covered both international and Greek development prospects. Darren Vaux from Australia gave an indepth insight into the licensing and regulations regime relating to marinas in Australia. Vaux operates the Empire Bobbin Head marina in NSW which was the country’s platinum accredited marina. He is also a vice president of the Marina Industries Association of Australia.

This was followed by an informative presentation into the growth of the Safe Harbor Group in the US, which operates a portfolio of 75 marinas and is the largest marina company in America. Baxter Underwood, the chief financial officer of Safe Harbor, explained the rapid growth of the company with at least two marinas a month and the strong fiscal and capital support the group has from some of the biggest US financial institutions.

The focus then switched to Greece with details given of the country’s marina privatisation programme and plans by the Greek Tourism Ministry to develop a strategy for the growth of marine tourism in the country which includes the development of more marinas.

These sessions were given by George Tziallas, secretary general for tourism policy and development at the Ministry; Grigoris Stergioulis, chairman and CEO of Enterprise Greece; Aris Xenofos, executive chairman of the Hellenic Republic Asset Development Fund (HRADF); and Panos Pappas, legal coordinator at the operations department of the Public Properties Company.

Next on the agenda was new international guidelines and standards for marinas. This session included a presentation on the ICOMIA environmental guide, policy papers and other marina-related issues by Udo Kleinitz, the organisation’s secretary general.

Estebon Biondia explained the recreational marine interests of PIANC (the World Association for  Waterborne Transport Infrastructure). He spoke of PIANC’s ambitions to become more involved in the sector and contribute more to international marina development.

A simple message of looking to be more involved in the marina sector was given by Ulrich Heineman, managing director of the International Marine Certification Institute (IMCI), which is associated with ISO. The session concluded with a presentation from Jon White, general manager of The Yacht Harbour Association (TYHA) on the 5 Gold Anchors Awards scheme.

The afternoon sessions covered training in marina operations. An informative insight into the anthropocentric approach of training and how it can apply to marinas was given by Dr John Kalogerakis. This was followed by a presentation from Robert Brown, president of GCM Contracting Solutions, which highlighted progress in drystack design and operation.

The role of CSR in marinas was covered by Thanos Belalidis from Sympraxis in Greece. On marketing, an interesting comparison between the state of play in the skiing industry and the similarities between that and the boating sector was given by Willy Fux from the LHM Conseil in France.

The day in between the two days of presentations comprised a tour of four local marinas in Athens which reflected the strength of the market and the high demand for superyacht berths for vessels up to and over 100m (328ft). The marinas included Astir Marina in Vouliagmeni, the 1,200-berth Alimos Marina (which is currently being privatised), Zea Marina and Flisvos Marina.

The conference was attended by around 350 delegates and speakers from Europe, the Americas, Middle East, Asia Pacific and Africa. Some 200 delegates shared in the marinas tour.

The location for the next ICOMIA’s World Marinas Conference will be announced in a few months’ time.